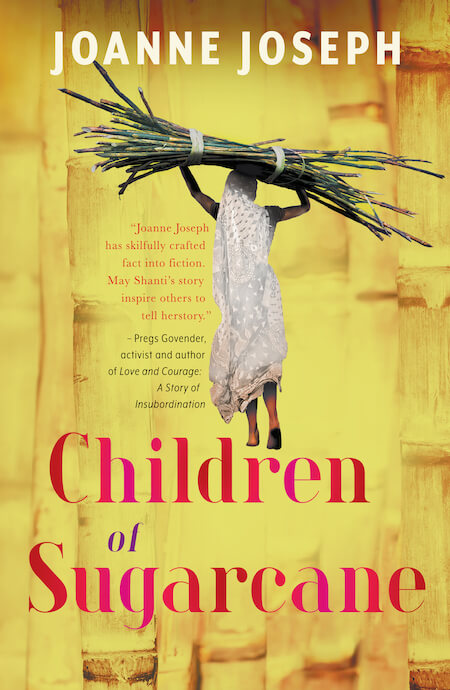 Certain events in history have served to change the profile or trajectory of South Africa as a whole.

Buried within those major events are the countless minor individuals whose own stories are no more than a tiny stitch in the overall tapestry. Author Joanne Joseph has bought some of those stories to life in Children of Sugarcane, a compelling novel based around the mass importation of Indian migrants to work on the plantations of Natal.

The story is a work of fiction based on well-researched facts that create a strong air of authenticity as the story spans four decades and two continents.

It begins in Madras in 1916, where we meet the elderly Shanti and her daughter Raksha. Raksha has broken a cultural taboo by falling in love with an Englishman, whose counterparts caused so much suffering for this nation under colonisation.

Then we flash back to find Shanti in a Durban jail in 1878, before unwinding further to the poor village of her childhood in the 1860s.

The thoughtful way that Joseph structured her novel makes this timeline-hopping easy, so the story flows well despite jumping across eras and locations. Along the way we are pulled into richly painted stories populated by fully rounded characters.

The early part focuses on the dire life of poor young Indian girls, whose families were more concerned with following tradition and saving face than allowing their daughters any freedom. The young tomboy Shanti rebels, and her lively spark attracts the interest of an older woman who plants dangerous ideas of choice and education into the smart girl’s head.

Joseph doesn’t flinch in describing the damage and abuse that can stalk India’s arranged childhood marriages or family life in general. Nor does she shy away from describing - and therefore spotlighting - the unfair nature of its caste system and general sexism. The author is never heavy-handed, however, and presents her opinions as facts and obstacles for Shanti to dance around once she becomes unwilling to settle for her place in a skewed society.

Yet the real condemnation is saved for the British in South Africa, with vivid descriptions of the appalling conditions the indentured labourers faced. If your thoughts haven’t dwelt much on those sugar baron days, you might not realise the bitter conditions the workers often faced, and particularly the women. Again the conditions are all laid bare amid the absorbing story of Shanti and her friends, with the horrendous system as the backdrop rather than the central focus, so it infiltrates your thoughts insidiously and unnervingly.

Joseph is an author and a radio and TV presenter, and she’s done an excellent job of research to make the history feel authentic. Her matter-of-fact style that sees her characters dealing with these conditions rather than commenting on them forces you as the reader to mull over the brutalities that men can inflict on those they perceive to be lesser beings.

The most powerful part comes when Shanti is arrested for murdering her white master after he rapes her repeatedly. These courtroom scenes are utterly absorbing, and I read that section in one long sitting, unwilling to stop while the thrill of the legal battle and the piercing horror of the mighty white judicial system gripped me. Here the words of the judge and prosecutors scorchingly expose the ingrained racist and sexist nature of the legal system of the time. And perhaps of this time too, since South Africa is still such an unequal society.

Shanti’s desperate self defence is branded as the calculated act of a woman who doesn’t know her place in society and doesn’t accept her third class status. Here Joseph has created a fiery indictment of the appalling way we treat other people despite the facade of fairness. “To tell the unvarnished truth was to commit a sin in these parts. This was a world of pretence, full of the scent of refinement while the stench of rot bubbled underneath,” she writes.

This dark period of colonial history was shameful and Joseph’s novel does not fear illuminating it. But it’s sweetened by the stylish writing, the absorbing plot and by the clever way it makes the reader complicit in sharing her condemnation and also sharing an admiration for her heroine.

Children of Sugarcane by Joanne Joseph is published by Jonathan Ball and is an Exclusive Books recommended read at R308.