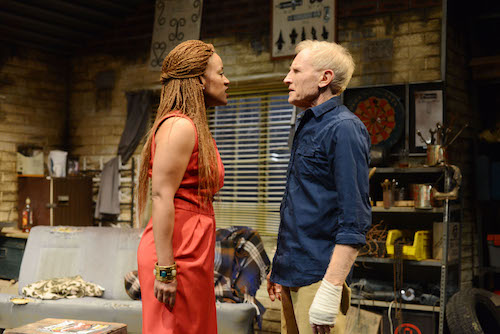 It’s been many years since Paul Slabolepszy last wrote a play, and little has changed over in the East Rand.

Characters still drink too much, talk too much and live too little, carrying regrets and secrets from the past that choke the present.
Slabolepszy’s latest offering is Suddenly The Storm, in which he also stars as the alcohol-fuelled, bitter and violent debt collector Dwayne.

It’s a serious piece of drama, set today but soaked through with the damaging legacy of apartheid, with this former policeman now grieving the death of his black childhood friend, Jonas.

That instant conflict of a brutal policeman having a black friend lays the groundwork for a play that explores the complexity of ordinary people trying to pick their way through the mess that racist laws created around them. 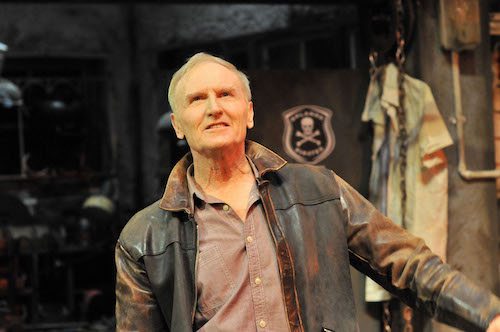 Suddenly The Storm will impress you immediately with the intricacies of the stage set by Greg King, with all the junk and clutter of a home that’s been lived in for 40 years.

Dwayne stomps in, wiping blood off a baseball bat used to collect the latest debts. Here comes Shanell (Charmaine Weir-Smith), his cheap and tarty younger wife whose wardrobe would do a hooker proud.

Later Namhla arrives (Renate Stuurman) a reserved and upper-class mixed-race woman who doesn’t quite explain why she’s schlepped out to the East Rand in her fancy car and fine high heels.

The conversation gallops ahead with Shanell talking far too much to this stranger, and both her and Dwayne failing to ask exactly what this unusual visitor wants from them. A theatrical necessity, I suppose, because we wouldn’t have a story if those characters were more guarded and suspicious. 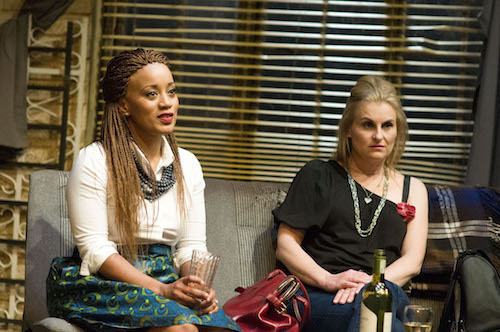 All three actors play their roles admirably, with Slabolepszy filling his character with all the negative emotions needed to create this sad, frustrated, disappointed man who’s beaten up and beaten down. Weir-Smith floozies her way around delightfully, angry with her man, coquettish with her lover, and feeling cheated with a life and a husband that haven’t delivered what she expected of them.

The lighting is perfectly timed and effective throughout, particularly as the storm that’s been crackling in the air and in their lives is finally unleashed.

Director Bobby Heaney keeps everything fast and tight, with African music marking the scene changes as the days flit by. As the story unfolds you’re drawn into their lives too, forming opinions and judging these characters whose flaws and very few virtues are being unravelled before you. As the tension grows you naturally find yourself guessing which direction the script will take you, yet the play manages to deliver a twist that both pleases and surprises.

Suddenly The Storm runs at the Montecasino Theatre until March 29. Tickets from Computicket.