Botswana - A tale of two safaris 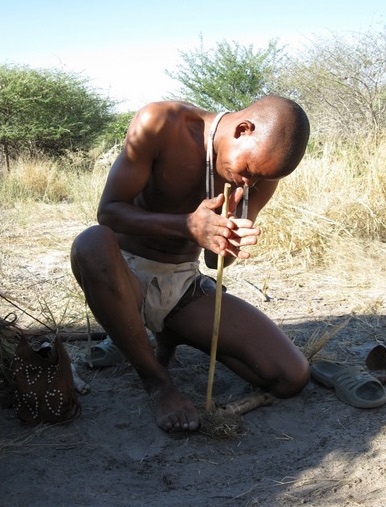 By the time Jooster Mokgapwe sits back and gives a weak grin of defeat, his hands are blistered.“No woman for me,” he says glumly, dropping the sticks he was manically rubbing together on a heap of dried grass and twigs. He’s failed the create-a-fire-by-friction test, which means he may not win the right to marry his prospective bride. But at least he will be spared from the far more dangerous task of chasing a lion away from its kill, and triumphantly hauling home the carcass to impress his intended father-in-law.

Jooster is one of Botswana’s few surviving Kalahari Bushman, but as he wields his traditional savage hunting axe you just know this shy, baby-faced youngster has never clubbed anything to death. Instead he educates guests at Kalahari Plains, a lodge run by Wilderness Safaris in what his ancestors call “the thirsty land.”

Jooster puts on an intriguing display of traditional hunting and survival skills, his skinny body all wiry energy. He’s clad in a loincloth and a fur headdress topped with mini antlers, but at the end he strips off his kudu skin loincloth, and pulls on ordinary jeans and a t-shirt.

Kalahari Plains is a remote, rustic place with eight en-suite canvas bedrooms and a communal area with a small swimming pool, 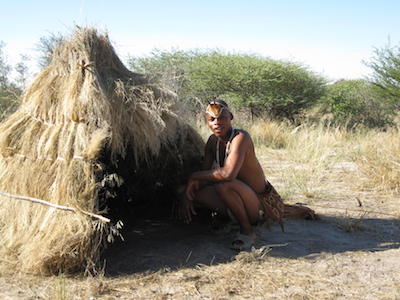 lounge and dining room, all raised off the ground to catch the breeze and confuse the predators. Solar power provides electricity and hot water, with insulated canvas walls to keep the rooms cooler. Guests go on dawn and dusk game drives, and return to delicious meals that defy the sparse surroundings.

Many of the staff are descended from the bushmen, and proudly demonstrate the traditions that still endure. Before Jooster guides me on a Bushman’s Walk we invoke the spirits of our ancestors to make our hunt successful. We each take a stick, drop it in front of us and jump over it, asking the spirits to lead us to a kudu. Since my ancestors wouldn’t know a kudu from a koala I fear we may go hungry.

His satchel is crafted from steenbok skin, softened by rubbing with a gory mixture of antelope brains and fat. Inside are tools straight from The Flintstones. 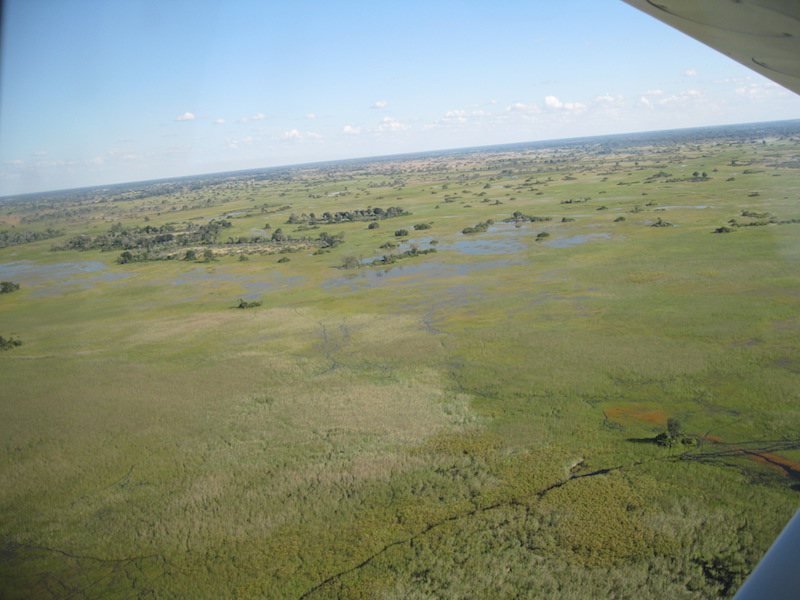 His axe is a concession to modernity with a metal blade instead of the traditional sharpened kudu rib. That’s handy for slaying animals, building a shelter, or breaking into a beehive to steal the honey. His bow and arrow are made lethal by dipping the tip in a cocktail of saliva and fluid extracted from insect larvae. Once an animal is darted the bushmen may track it for up to 24 hours until it succumbs, or axe it to death if they catch it sooner. It’s all brutal stuff, all explained with the sweetest grin.

For a fascinating finale he sets a trap to catch guinea fowl that scavenge through the scrub. With deft hand movements he rigs up bits of string around branches bent over a succulent berry.

Mimicking a pecking bird, he gently touches the berry with a stick. Pow! The stick yanks from his hand and flies upwards, bobbing around like a bird with a broken neck. It’s impressive stuff. Jooster should win his woman after all. 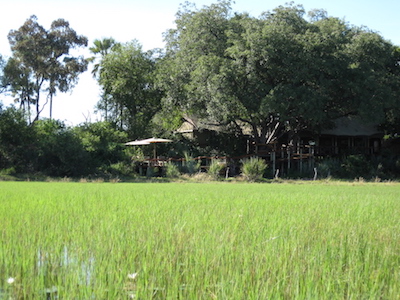 The Central Kalahari Game Reserve is an unusual safari experience. It spans 5-million hectares of savannah that support black-maned lion, leopard, cheetah, giraffe and a wide range of antelopes. It’s a stark, barren place until rain brings the land to life again, transforming the sandy ground as grasses sprout and broken shrubs miraculously regenerate. The new life attracts the hungry grazers, bringing hungry predators in their wake. But the soil sucks up the water greedily, and once the rains switch off the greenery quickly withers, leaving the land scorched and stark again. It’s Africa at its most raw and unforgiving, with the safari lodges providing a delicious touch of luxury in the wilderness.

Soon you become so accustomed to endless brown nothingness that you forget just how odd it is. I only remember when I transfer to Tubu Tree Camp on a Cessna, an hour’s flight into a completely different world. As we near Okavango Delta the dull browns soften into greenery. Soon we’re flying over large, healthy trees surrounded by water. Everything is lighter, brighter, more alive.

Tubu Tree Camp stands on Hunda Island, a permanently dry area of grassland amid floodplains. Each of Tubu’s five tents perched on wooden platforms offers stunning views across the landscape. The sprawling knee-deep lagoons and channels around islands of rich savannah teem with giraffe, zebra, monkeys and endless antelope. 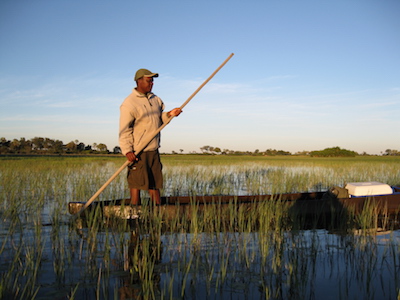 On an evening game drive we stop at a mighty termite hill where a young leopard lifts his head and gives us a cursory glance. He goes back to doing absolutely nothing. Then with a single indefinable movement his entire body tenses from an idle lump of fur into a streamlined killer. Something has piqued his interest, and in a blink he slips into the undergrowth.

The most amazing experience comes when you take a trip in a tiny mokoro boat. I’m closer to the water than the spider webs that skein across my face as my guide Joseph punts me through the reeds.

The peace is astonishing. The only sounds are buzzing insects and the distant trumpeting of an elephant. That’s the signal to beat a retreat, as a fragile mokoro offers no protection from such lumbering bulk.

Joseph is small and slight, with a timeless face that could be 30 or 300. He tells me I should meet his uncle, who is scarred from head to toe by lion claws. That’s scarred, not scared, and there’s a mighty difference. 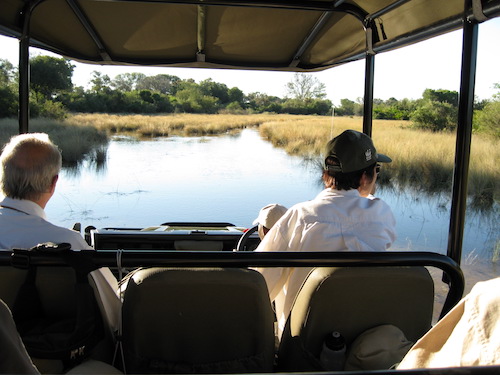 I’ve asked him for his most memorable experience, and he’s telling me what to do when you’re face-to-face with a lion. You mustn’t run, because that’s a race you won’t win. Instead you run towards the lion, flapping your arms and making as much noise as possible to prove you’re the more aggressive beast. The lion will be so intimidated it will turn and flee, he promises.

I mull that over as I watch the moon rise over the delta in a vivid ball of red. I spot a flaw in the lion-tackling theory. What if you run closer and realise the lion is going nowhere? Ah yes, Joseph admits, it only works about 60% of the time.

Bushmen perfected the technique to frighten lions away so they can steal their kill, which is easier than bringing down an antelope yourself. But it doesn’t work well if they kill a zebra, because that’s their favourite meat and then you have to fight them for it, Joseph says. Just ask Uncle Scar-Face.