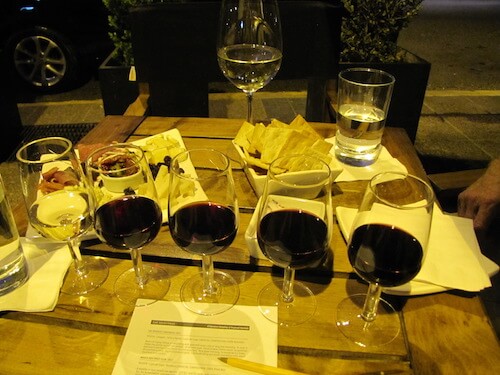 This one looks delicious, I thought, as I swirled the wine around in my glass and took an indelicately large slurp.

Ah yes, a definite whiff of petrol and a lingering taste of salami. Is that normal for a Malbec, I wondered, as I eyed its oddly neon hues. No, my partner said, but the sommelier had advised us not to sit out on the pavement when we did the wine tasting.

We couldn’t resist, though. The tables outside The Vines of Mendoza were so inviting in the warm night air. Now five of Argentina’s regional specialities were neatly arranged in front of a pungent platter of cheese and smoked meat we’d ordered to soak up the alcohol. It was delicious, but even the hearty Malbecs struggled to match the flavoursome olives and chorizo.

Vines of Mendoza wine bar and its knowledgeable young staff was a fabulous find. It hadn’t been the smartest plan, spending 14 days in Argentina without going anywhere near a vineyard. Not visiting a wine farm is almost as sacrilegious as declaring yourself vegetarian in this land of the beef and vine. I’m no more a vegetarian than I am a teetotaller, but time, rather than unwilling tastebuds, was the problem. Argentina is a mighty big country to tour, from its long, skinny tail near the Antarctic right up to its broad shoulders that muscle up against its neighbours Brazil and Chile in a macho Latin American style at the top. 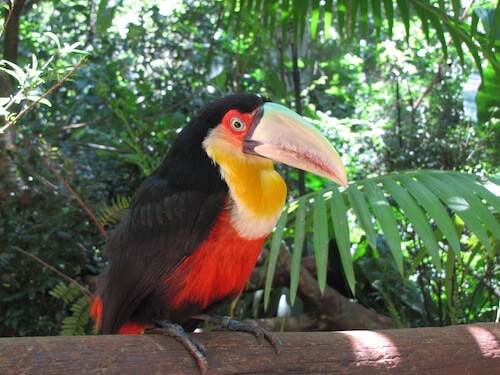 Mendoza is the heartland of its wine industry with more than 1,000 vineyards in the foothills of the Andes. Reds account for 90% of the output, with white wine not taken very seriously at all. “Argentineans have a very bad concept of white wine and some say it’s not wine at all,” our sommelier said in his gorgeous lilting accent.

White wines seem a bit prissy, really, when you’re wolfing down giant hunks of well-seared cow, strutting around in cowboy boots and manfully leading your woman around the dance floor in a fiery tango. You can hardly do that with a delicately perfumed Sauvignon Blanc in your hand.

Vines of Mendoza offers 98 wines by the glass, from about R35 to R550. It’s a delightful place, with a selection of tasting menus and a room where you can mix and match various blends to create a bottle of your own. I’d never pretend to know better than the local wine professionals, but the room was bustling with ambitious amateurs gleefully mixing their own blends. Imagine trying that in Stellenbosch. 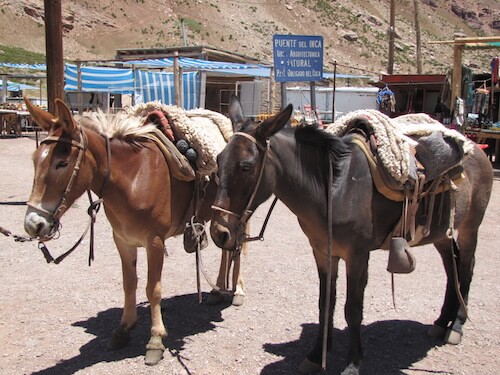 As I sampled wine number three on the busy pavement I started laughing as the words ‘tart and rough’ jumped into my head. “I meant the wine, not the pedestrians,” I said as three girls in micro-skirts tottered past. Reading the tasting notes in Spanglish grew more hilarious as the night went on. The token white in my line up was a Torrontes, another signature grape for Argentina and endearingly described as having “notes of trying yellow straw gilding with greenish tones.”

My partner took a glug of Qaramy Finca 2005 and was flabbergasted. “Oh my, there’s a lot of that going on,” he said. It was so strong even the goat’s cheese quivered in awe. The notes to a Malbec De Angeles 2009 doubled me up in giggles. “Interesting personality and medium body, complex but easy drinking.” That summed me up perfectly by that stage.

Then an open-topped bus drove past with youngsters hollering and squealing from its crowded roof. The last day of school, our Vines man explained. But Argentineans don’t need an excuse to be loud and lively late at night. 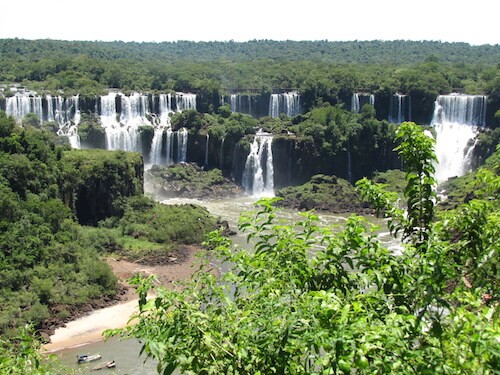 Setting your internal clock to local time isn’t as easy as winding your watch back five hours. It’s a country where anyone eating before 10pm is clearly a foreigner, since the locals are still deciding where to have their pre-dinner drinks.

Later we strolled past buzzing restaurants and diverted into the nearest ‘heladeria’ for decadent ice cream. If there’s a national flavour it has to be Dulce de Leche, made by boiling milk and sugar to a thick caramel, then serving it on top of anything and everything. Dulce de Leche with Brownies was my favourite ice cream, but you can feel your arteries cracking as it seductively slides down.

Mendoza is a lovely old colonial city where it never rains. It’s kept fresh by 50,000 trees watered purely through an irrigation system channelling water from the Andes. The channels were there long before European settlers arrived, but the city, like much of Argentina, has distinctly European architecture. Five symmetrical squares flanked by grandiose buildings form the centre, and as we crossed Plaza Independencia a tango show was in full swing. About 10 couples dressed in black tie outfits strutted in a dance that’s half fight and half seduction, while the portly singer poured his soul into songs about lost love. 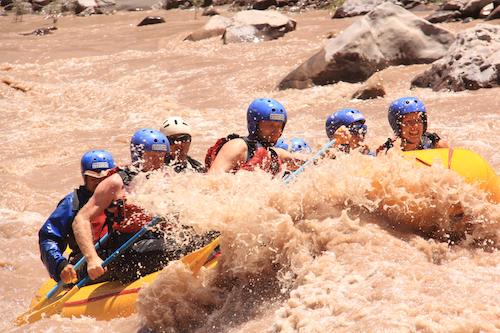 The next day we rafted down River Mendoza, in water as cold and caramel brown as Dulce de Leche ice cream. The magnificent scenery was stark and barren, and it formed a striking contrast to the elegant green streets we strolled through that evening.

The Andes makes beautiful backdrop to Mendoza, with Mount Aconcagau imperiously looking down on the town with its white cap luring - and often claiming - mountain climbers. The next day we passed a graveyard where the bodies of climbers they’ve managed to recover are buried. We drove upwards through a deserted ski resort, with chairlifts suspended above hills of grass, patiently waiting for the Andes to hurl down the white stuff that often makes this truck-filled road into Chile impassable.

We stopped short of the border near a small lake at the start of the Aconcagau trail. A bitter wind ruffled my jacket like a flag, with the hood flapping so violently I could barely hear our guide speaking. Walking up to the lake propelled by the wind was a doddle, but the walk back facing merely a minor breeze by Andean standards left me breathless. Three climbers passed us, kitted out for a major exploration. I hope they made it. A small article in the paper two days later reported one dead, one injured and one missing America.

Wine tasting on the pavement wasn’t the most magnificent part of my Argentinean journey – the mighty Iguazu Falls wins that award. But sitting in attractive Mendoza absorbing the exuberant street life is the perfect vignette that will linger long after the taste has faded. 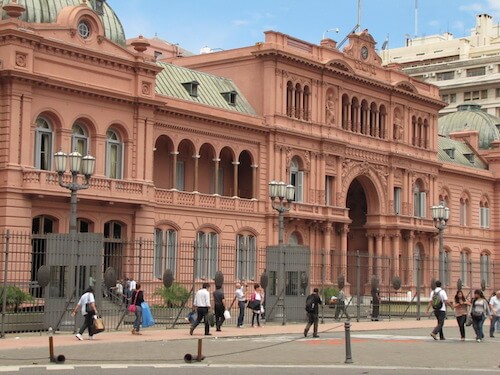 WHAT TO DO IN ARGENTINA:

Buenos Aires is worth at least four days, with the impressive Casa Rosada, Colon Teatro, numerous galleries and museums, quirky San Telmo and numerous shopping and dining areas. Then travel inland to Iguazú Falls, up on the border with Brazil. You can combine that with a trip to Mendoza for vineyard visits, mountain tours and river rafting.

My best finds were the stylish Hotel Etoile in the Recoleta district of Buenos Aires, complete with a rooftop swimming pool, and the extremely welcoming Patios de San Telmo. Mendoza’s Amerian Executive Hotel on Plaza Italia is nicely priced and very central, which I found on Booking.com. The excellent Exploration Journeys (www.argentinaexplorationjourneys.com) helped me plan the internal leg by suggesting an itinerary, then booking all the local flights, accommodation and guides. 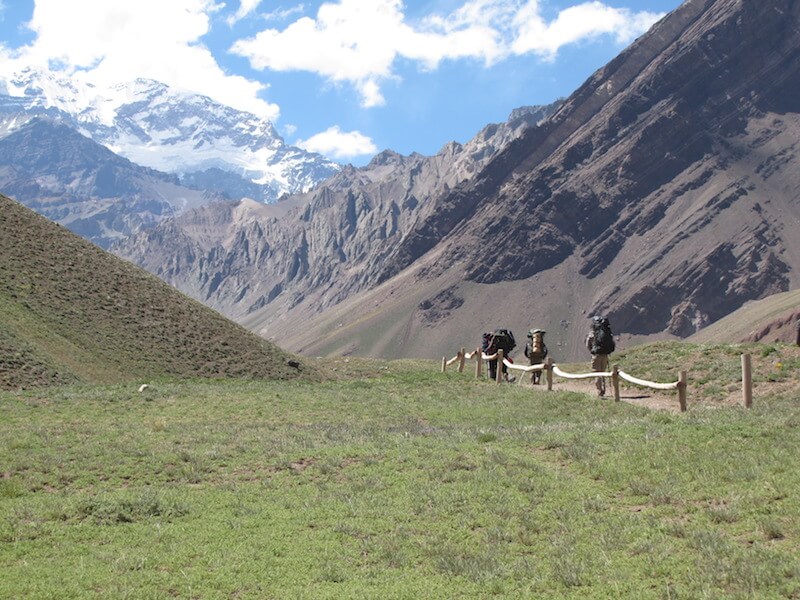