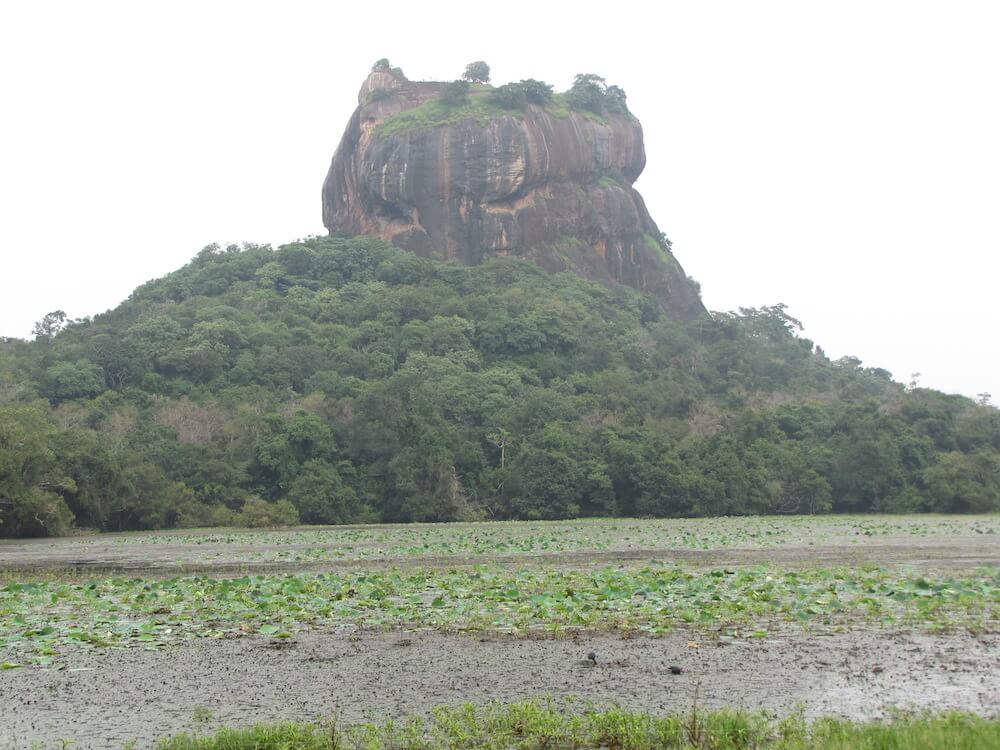 I’ve lost count of the hundreds of steps I’ve climbed by the time I finally wheeze my way onto the flat top of Sigiriya Rock.

This massive stone platform soars up incongruously out of grassy plains, tall enough to defend from marauding enemies and wide enough to have supported a monastery and a palace.

Emerald coloured fields 200m below fade into misty horizons as I step over crumbled walls where King Kassapa reputedly lived in AD477. I try to picture his poor serfs lugging building materials and everything else you need to run a palace up the sheer sides of this rock kingdom. It’s much more do-able now, with a hand rail all the way.

Half way up, an alcove serves as an ancient art gallery, with vivid frescos showing seductive buxom beauties. No, my guide Sujan Weerakoon explains, they were painted for the king’s titillation, not for the monks who supposedly also used this majestic rock as their monastery.

Sigiriya is one of eight Unesco World Heritage sites in Sri Lanka and one of many must-see attractions, including ancient capitals, splendid temples, glorious beaches, cool hilltop towns and safari parks.

For years this little tear-shaped island was off-limits for tourists, with a brutal civil war followed by the devastating 2004 tsunami. Finally the country is rising above its past to become a holiday hotspot.

I’d booked a tour with Exodus led by the excellent Sujan, who tells stories of the war between the Buddhist Sinhalese majority and the Tamils seeking independence, and shares his memories of the tsunami that tore up the south coast leaving 30,000 dead.

These days Sri Lanka feels safe, warm and inviting, with excellent food and prices that are affordable even for Rand-toting South Africans.

I soon learn how to pronounce ayubowan, a blessing to say hello, and St’uthi, the word for thanks. More words join my vocabulary too, picked up from Sujan’s catalogue of catchphrases. Chop-chop is one he uses ironically, since there’s no sense of urgency here. “If you’re a whinging, moaning person this is the wrong holiday, you’re in the wrong place,” he says, instantly inciting us to whinge and moan.

But there isn’t must to moan about. I landed in the capital, Colombo, and was relieved to find the taxi counter open even at 3.30am. Colombo itself is worth a day or two for the fun of dashing around in tuk-tuks and enjoying the contrasts between old and new. But the real sights lie further afield. 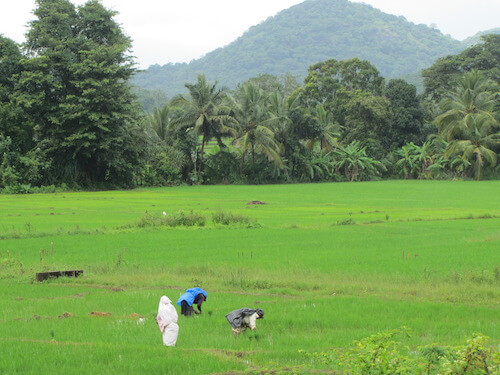 While the country is blessed with beautiful weather, it knows how to throw a good storm too. We splashed around the ancient capital of Polonnaruwa, not really seeing the 12th century ruins behind the deluge of rain. My feet were so soggy I shed my shoes and splashed barefoot through lukewarm puddles to enter the still impressive temples.

If you want to go clubbing, get drunk and bonk on the beach, you’ve chosen the wrong island. Booze is expensive and the government often declares alcohol-free days. Imagine celebrating Christmas Day with a nice cup of tea and you’ll get the picture. Eating out isn’t common so good restaurants are scarce, making hotel dining the best option beyond the more developed cities.

I fell into a routine of an early morning swim followed by breakfast of dhal curry with hoppers. Hoppers are like pancakes, except the cook rolls the batter around a high-sided pan to make an edible basket.

For lunch I’d buy something spicy from the street stalls, watching skilled cooks create four hoppers simultaneously. Dinner was often the national dish of curry and rice, but this is no two-bowl affair. I’d end up surrounded by eight different dishes, as the waiter brings a tongue-tingling meat curry, rice, poppadums, a dangerously fiery sambal of coconut and green chili, a green leafy curry, potato curry and a vegetable curry. A small version served as a ‘lunch box’ in a café might set you back R17, or ten times that for the full feast in an upmarket hotel. 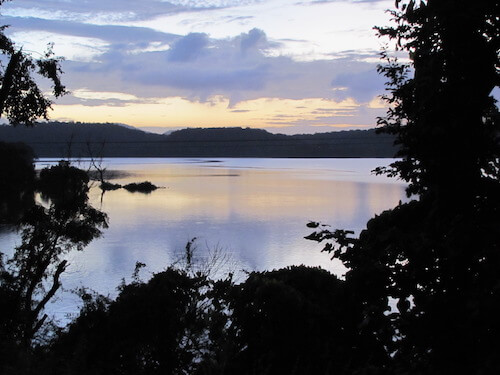 One essential stop is Kandy, a bustling city surrounding a placid lake. We got a real Kandy crush when we joined the crowds at the Sacred Temple of the Tooth Relic, where Buddha’s tooth is preserved behind a vast golden door. Hundreds of people streamed into the main hall carrying flowers as an offering, queuing up the stairs and cramming onto a balcony as drummers and priests performed their rituals. Finally the golden doors opened and people streamed in, and we were swept along on the reverential tide.

I far preferred the open spaces of Kandy’s Royal Botanical Gardens, with an orchid house and palm tree avenues. As I strolled, along a man emerged from the bushes and asked if I want to see his scorpion. Oh-oh, I thought, here comes trouble. It was a relief to see he meant a real scorpion, which he held on a massive leaf and prodded until its tail curled menacingly.

Minutes later I was accosted again, this time by a young student asking if I spoke English. When I said yes, another 10 surround me and we spend a few jolly minutes brushing up their conversational skills. I was still smiling when I bit into an apple and joined a few people watching a troupe of monkeys. Toque makaks, the cutest little things you can imagine. Then one swung over and sat at my feet gazing up at my apple. Another joined him. Then there were three, and I nervously shoved my half eaten apple up my t-shirt to hide it. Just in time I realised I don’t want three monkeys rummaging inside my t-shirt, so I lobbed the apple at them, wincing as I mentally heard Sujan chiding me for feeding the animals. 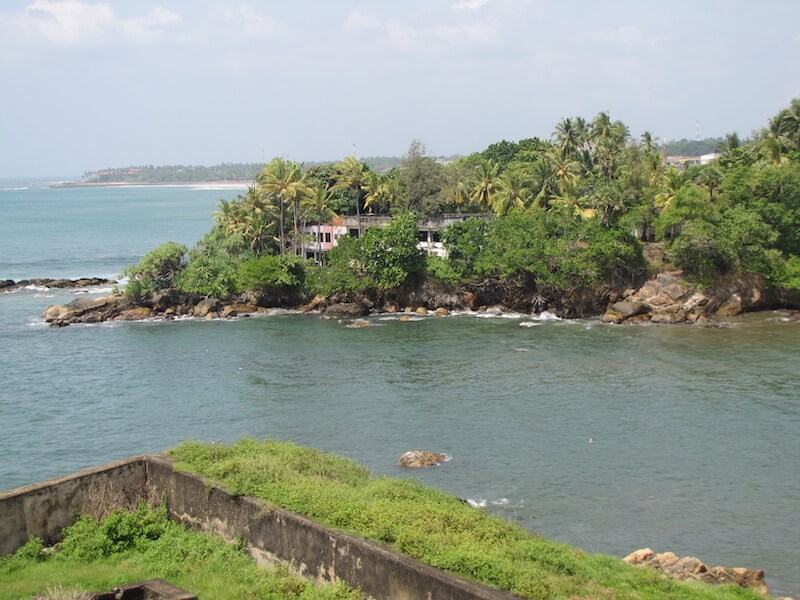 I decide to scarper before any more wild encounters, and headed towards some bus stops just outside the park. Even before I was there a battered bus swung along with the conductor hanging out of the door, and he practically scooped me up on the move. You’re a tourist, you must be going back to town, he grinned.

Sri Lanka’s central region is developing into adventure sports territory. At Kitulgala we rafted down three fairly tame river rapids, ending up drenched and laughing with delight. The water was so warm that we all jumped out to float downstream, passing lush greenery until we reach our well-hidden hotel on the riverbank.

Traditions are still strong in some areas, and Ayurveda centres abound. Ayurveda is the world’s oldest scientific medicine system, and at a spice and herb garden the guide explained the medicinal uses for each plant. He also demonstrated the world’s oldest depilatory, made from Temple Plant, turmeric and a dozen other ingredients. He smeared some potion on a companion’s hairy leg, and 20 minutes later it was bald! 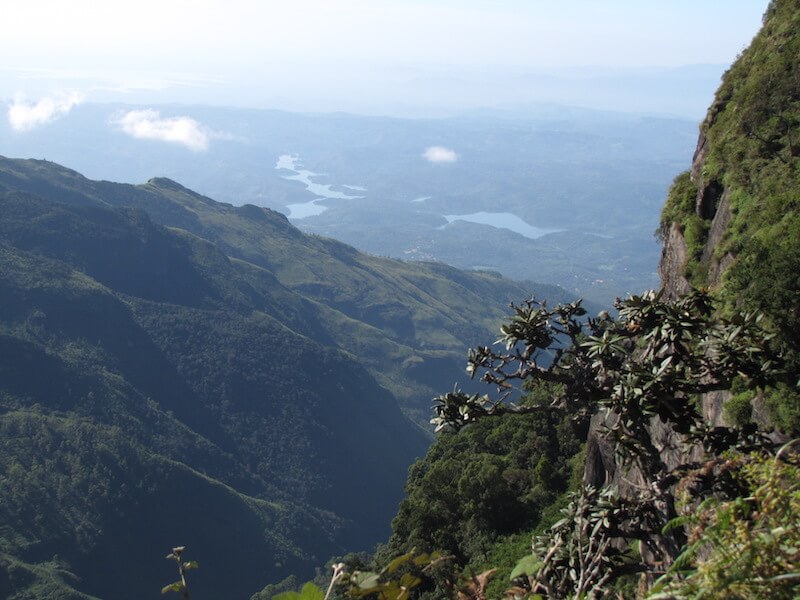 Men aren’t allowed to display their legs in shorts after 6pm at The Hill Club at Nuwara Eliya, where a whiff of the colonial past still lingers. The Hill Club was founded by the Brits in 1876 as a gentlemen’s club and it’s now a gorgeous quaint hotel.

I’m admiring the endless view when I hear Sujan fretting behind me. “It will be your end too,” he says, urging me back from the perilous edge. I step back chop-chop, not wanting to provoke any more tears on an island that’s already seen too many.

Pop Sujan an email if you want to discuss travel plans with him - a great guide, driver and raconteur! He's on: sujanweerakoon@gmail.com