The water of life 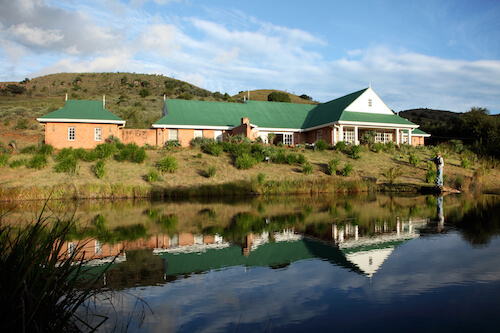 A good few years ago, veteran conservationist Michael Rattray began to worry.
Every year the rivers flowing into the Kruger National Park were getting lower, and almost dried up completely in the winter.

Rattray ran the MalaMala game reserve near the Kruger for 52 years, and he could see the harm the changing water flow was creating. Watching the animals suffer as the rivers petered out kindled a new passion for water conservation, and he waded in for a final adventure.

First he did what any gung-ho adventurer would do, and hired a helicopter to fly above the rivers and trace their source back into the mountains.

He found that the land was heavily overgrazed by sheep and cattle, and was no longer in good condition. “Livestock was just wrecking the land. It was completely overgrazed and the streams were hardly running in winter,” he remembers. “No water, no life.” 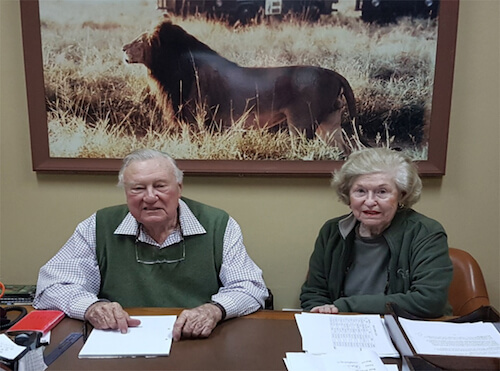 One by one he bought up the individual farms and drew up a vast and long-term recovery plan. The result is Mount Anderson, the country’s first private water catchment reserve.

The spectacular land rambles up and down stunning mountains and valleys with sandstone escarpments, and its healthy wetlands now preserve almost all the rain that falls and channel it into tributaries of the Olifants, Kranskloof, Spekboom and Blyde Rivers.

Water conservation is a very dry subject, jokes Mount Anderson’s manager Trent Sinclair, but after a day of driving and hiking around to see what’s happening, it gains an importance that should turn anyone into an evangelist.

First the cows and sheep were evicted, allowing the grass to thicken and the soil to recover. But the grass itself needs to be controlled, to avoid it becoming so thick that rain can’t soak into the soil beneath. 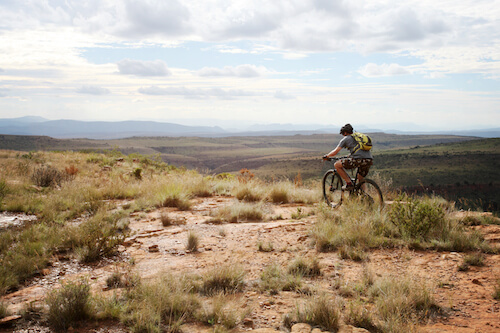 The solution is fire, with controlled burning of dry grass every few years, so fresh shoots can grow. Burning the old grass allows the earth to act like a sponge and absorb the rain to fill its underwater reservoirs, with the water gradually seeping into streams all year round to keep the rivers flowing.

The fires also release seeds from plants that rely on heat to germinate, and one species popped up that had never been spotted before. Botanists from Mpumalanga Plant Specialist Group confirmed it was uncatalogued, and it was named Callipses Normae after Michael’s wife Norma.

The restoration project also saw water-guzzling eucalyptus, wattle and pine trees removed. Now Trent is obsessed by American bramble, which is next on his hit list. “It grows so thickly that the animals can’t move through it,” he grumbles, and you know its days are numbered. Then some roads near the mountain tops were closed to prevent soil erosion. 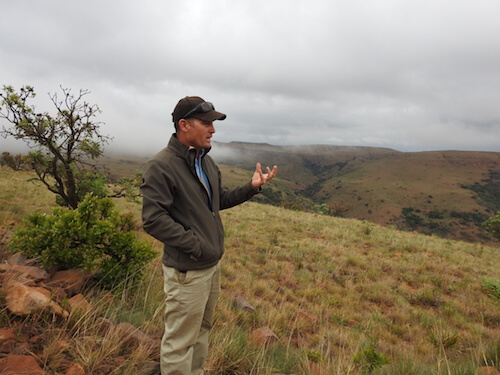 The rejuvenated land now catches and preserves almost all the rain that falls. “You can’t do anything about the amount of rainfall, but if you have the right grass cover and plant life you’re going to get the maximum amount of water running off the mountains,” Trent says. “Farmers downstream have said that the water flow has become much more consistent and clearer with less silt because there’s no erosion upstream.”

Once Mount Anderson recovered, blesbuck, zebra, eland and mountain reedbuck were introduced. Endangered oribi arrived by themselves, with leopards crawling in their wake. We spot a jackal, and Trent points out brown hyena tracks. Tilapia and yellowfish were introduced into a dam to join the resident trout, and when a fish eagle flies overhead with a trout flapping in its beak, Trent half tuts and half smiles.

The land is dotted with disused mines from gold fever in the late 1800s and early 1900s, when opportunistic miners panned the rivers and blasted into rock seams. The most spectacular mines are right on the edge of a high plateau with a scary freefall onto the valley below. 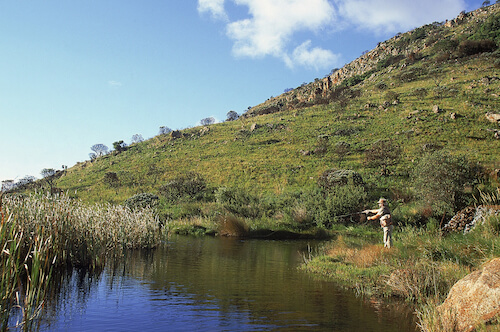 Running a nature reserve is expensive, and low-key tourism helps to cover the running costs. Guests stay at Golden Cottage, a lovely farmhouse with five en-suite bedrooms to book for exclusive use by visitors looking for a secluded retreat. The package includes all meals, game drives and guided walks, with fishing, horse riding and mountain biking also available, including a tough pedal to Pilgrim’s Rest 22km away.

Golden Cottage is reached up an 8km rough mud road that threatened to scuttle my friend Stephen’s city-slicker Audi with every rock and rut. After 2km I rang Trent to check that the road wasn’t about to deteriorate. “No,” he reassured me. “It doesn't get any better, but it doesn’t get any worse.” 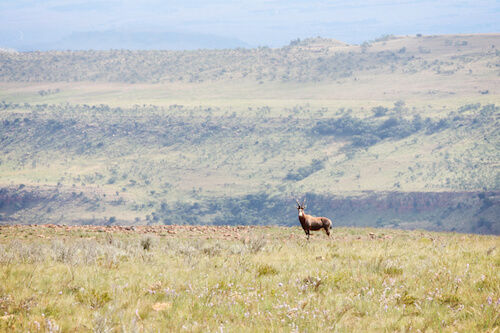 A glass of wine over lunch on the deck had us laughing about the journey as we grinned at the beautiful valley and river below. The meals are delicious, as Trent’s wife Monica taught the staff to prepare dishes from local produce, like fresh trout gravlax and mushroom filo baskets. Later, Stephen hiked through some striking rock formations to a nearby dam, while I fell into a happy reverie on the deck.

The next day we followed a stream to a waterfall, with Trent stopping to analyse the water quality. After a picnic by a dam we pushed off in a small boat to look for the tilapia and yellowfish. Then on the way back we climbed up to caves once used by the bushmen, who left Stone Age tools and small bones in their wake.

While Mount Anderson doesn’t offer the thrills of a Big Five safari, it’s incredible to know that the water flowing from this restored land is keeping those animals alive. 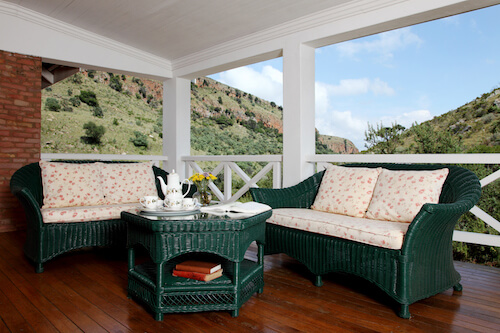 * Golden Cottage sleeps a maximum of 12 and a minimum of four people. The luxurious farmhouse has two elegant lounges, a dining room, a TV-room come study, a snooker room and a terrace with a spectacular view over the tiered trout ponds. One bedroom is inside the farmhouse whilst the other four are in separate cottages.

Michael’s youngest daughter Sarah Wilson handles the reservations, and has cut the price to cater for South Africans, with the cost being set dynamically according to demand. “It is the most perfect place for South Africans to get away into the mountains, enjoy some space and breathe in that fresh air again and I really want it to be affordable this year when the whole world has gone mad,” she says.