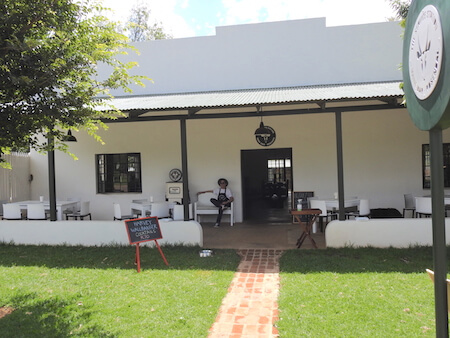 Things have changed in the 13 months since I last visited the tiny Free State village of Rosendal.

The potholed roads leading here have grown more derelict, yet so many people have braved the journey that more than 30 properties or plots changed hands last year. That’s a huge number in a town of about 100 residents. A boutique hotel has opened, several homes have been converted into guest houses, and some renowned artists launched a contemporary gallery. The new outdoor activities centre hires out bicycles and can book tours like Holkrans Sunset Experience, where you watch the sun burn out in glory from a cliffside cave.

But you’ll need a stiff drink to digest the next innovation – a chic wine bar serving a choice array of tipples and Asian-oriented cuisine has opened on the muddy strip that masquerades as a high street.

The Service Station Wine Bar inhabits a 1950’s petrol station restored to retain many of its original features. The service pit where mechanics once tinkered under cars was deepened and turned into a wine cellar. Comfy sofas and armchairs abound, and the bar stools and tables crafted out of salvaged wood are for sale, in case you tipsily decide to take home a souvenir. Eclectic music plays as the venue draws in Rosendal’s increasingly diverse inhabitants as well as out-of-towners escaping for the weekend. 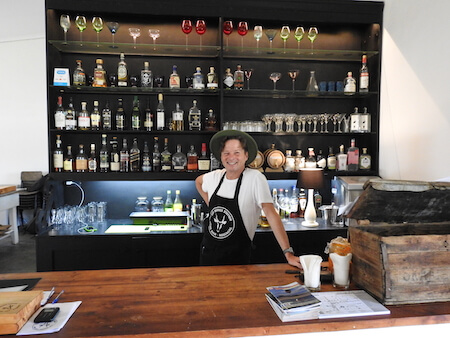 “I didn’t ever intend to be a wine bar owner,” says its creator Douglas Mason, a Canadian journalist and analyst who arrived eight years ago and has restored the heritage buildings of the Post Office, the Bank and the Blacksmith’s into stylish accommodation. He was renovating this building as another guesthouse when someone suggested a wine bar instead.

He found the idea intimidating, but jokes that he’s at his most creative when he’s scared and terrified. “Rosendal needed something like this. We have a small and growing number of people building houses and creating a rural idyll and there were a couple of restaurants but there wasn’t a wine bar,” he says.

The challenge of learning the wine and restaurant trade became far easier by recruiting Francois Roux as his investment and operating partner. Roux had returned to his holiday home in Rosendal after a career in food and beverages spanning Argentina, Ireland, Saudi Arabia, Israel and with Radisson Hotels in Rwanda. 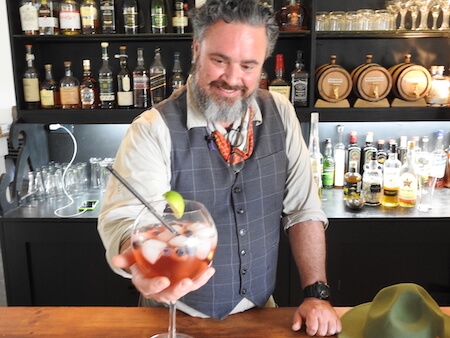 The bar opened last August as a product of the pandemic, Roux says. “What’s happened here is because of Covid. There’s been a boom with an influx of capital from people like architects, artists and other interesting people deciding to stay. Rosendal felt like the end of the world in the old days, but now we have educated people who have travelled the world living here.”

Roux’s globetrotting background may give him itchy feet in two or three years, but right now The Service Station speaks to him in a way that many of his previous ventures never did. “The world has changed so much in the past two years. The plans I had are dead and buried and Covid taught us not to look so far ahead but to live in the present,” he says.

Their chef, Carla-Lené Cronje, was recruited when Roux attended one of her dinner parties in the village. “He was coming into the kitchen and checking up on me and I knew he was with the Radisson so I was listening to the hints he was giving me,” she says. The next day he hired her. She has creative freedom over the menu, and serves Asian treats like steamed bao buns filled with jack fruit, dim sum pork and chive dumplings, and vegan kimchi potstickers. 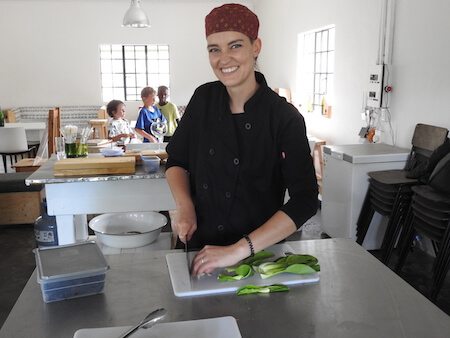 Cronje buys meat and eggs from local farmers but sourcing more exotic ingredients isn’t easy in this remote area, so she commissions a neighbour with a permaculture patch to grow specific food such as pak choy and coriander. “I can walk into the garden, flick off the snails and take it to the kitchen, it’s that fresh,” she says.

Mason believes the ‘audacity of amateurism’ is what encouraged him to dive into the wine trade, and he’s finding the industry eager to help. He’s learning from experts including Michael Fridjhon, whose wine column in Business Day led him to a Chenin Blanc from Marras in Swartland, a relatively young winemaker producing beautiful wines at reasonable prices. Other finds were sourced from wine fairs and by visiting wine estates. “I bought a little bit on whim, which is why our list is a bit funky and eclectic. It’s not the typical wine list of a small town or a small restaurant - it has diversity and depth. We’re looking at young wine makers who are critically recognised but don’t have the commercial pull to command high prices. I would say that many of the wines on our list will attract considerably higher prices in the next two to three years.” 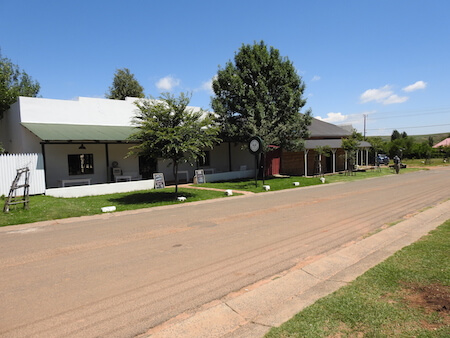 They also promote scarcer varieties, like a Viognier from Ridgeback Wines and an Albarino from Springfield Estate. Albarino is a Spanish grape that’s almost unknown here and Springfield’s version is spectacular, he says, with banana, pineapple and floral notes.

He was also delighted to source two reds from Mont Du Toit estate in Wellington. “I actually discovered Mont Du Toit in Canada where it was expensive, so it was such a rare pleasure because I couldn’t afford it. Now I’m here and I’m buying it from the cellar door.”

One notable thing is that there are no imports. “I’m an economist so I’d rather buy good South African wine than pay more for foreign wines,” he says. “The South African wine industry is a gem – there are lots of very creative hard-working producers and we celebrate that.” The price list also carries a modest mark-up that’s noticeably lower than the industry standard, to make it accessible for the local market.

Customers are proving are curious and willing to try different things, and Mason and Roux want to take them on a learning journey. They encourage people to ask questions, and do wine flights every Sunday comparing three wines of a single variety. People are given tasting notes, a score card and a pencil and asked for their opinions. “If they don’t know about wine we have a ‘how to taste’ sheet and tell them what to look for and how to enjoy wine in an easy way that’s not pretentious,” Mason says. They also plan to offer whisky tastings to promote South African and Canadian whiskies.

Mason is stone cold sober when he says his ambition is to make The Service Station the best and most beautiful in the country. “Why not be the best?” he asks. “If you do a beautiful restaurant wine bar in Cape Town or Johannesburg you might get noticed, but if you do it in an obscure, out of the way spot in the Free State you definitely will get noticed.”

First published in Business Day.  For details of the village, see: www.rosendaltown.co.za

I am intrigued and would love to visit The Wine Bar Service Station! Oh what a delight it would be to be served a young local wine and discover it’s depth and accents!