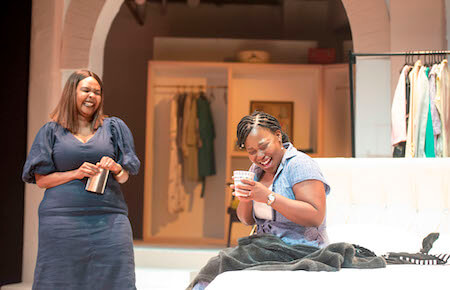 It must be wonderful performing the first night of a new play in front of a supportive audience.
When it’s over, friends and family leap to their feet and thunder their applause, and the taste of success is exquisite.

That was the scene when Diaparo Tsa Mama (My Mother’s Clothes) held its opening night at the Market Theatre, with the audience whooping in delight. Can you sense that I’m about to put a damper on it?
Anyone not related to the cast or crew will view the production through different eyes, and for them, this play probably won’t meet the expectations of a good night at the theatre.

The script by Rorisang Motuba features three sisters who come together in their late mother’s bedroom to sort through her things and decide which outfit she should be buried in. That’s traditionally the choice of the eldest, we are told, but she’s living the high life in Amsterdam and late in her return. When she does arrive, there are personality clashes between them and the air is rife with sisterly bickering. 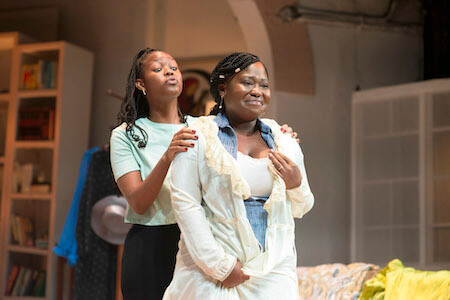 The first weakness is that Diaparo Tsa Mama doesn’t have enough substance to be a stand-alone play. If you took out all the long, languishing moments spent sorting out the clothes, it could all be over in 40 minutes. The second concern is that Motuba has directed her own play, and it needs someone less in love with the script and its ideas to tidy and tighten it up. It’s flabby in those languishing moments, and too tense in other parts, where the actresses tip from drama into melodrama.

The set by Philani Masedi is lovely, with a bedroom and its entrance hall decorated perfectly to recreate an older woman’s sanctuary. The seating arrangement also works well, with the play staged in the large John Kani theatre but with the usual seats roped off and temporary seats raised on a small platform so we look directly into the action. 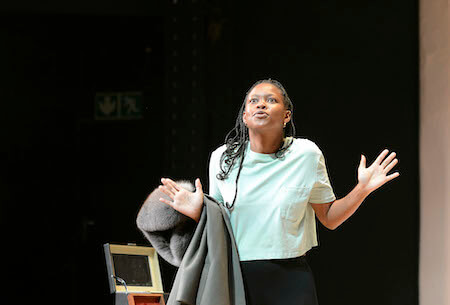 The three actresses all have their good points, but here they are trying to breathe too much intensity into words that don’t do their over-zealous efforts justice. Lesoko Seabe as Beauty, the elder sister, is given lines and a demeanour that instantly seem fake and overblown. Some of the audience laughed. Others may have rolled their eyes. Dimpho More as Noni, the youngest sibling, shows promise as a lively actress while Ziaphora Dakile is comfortable in the role of the middle sister, although her monologue about pregnancy and fear feels overwrought.

As the play unfolds along with the clothes, some sisterly secrets are revealed, generating emotional clashes then tender support. But it all feels very by-the-book, written to a set pattern that aims to bring in highs and lows at predetermined intervals. It touches on culture, freedom and restrictions, love and neglect, and creepy friends of the father. Yet somehow these parts never gel into a rounded whole. It sort of leaves you wanting less, as well as more.

Diaparo Tsa Mama runs from Tuesday to Sundays until 10 April at the Market Theatre. Tickets from Webtickets: