Music Of The Night 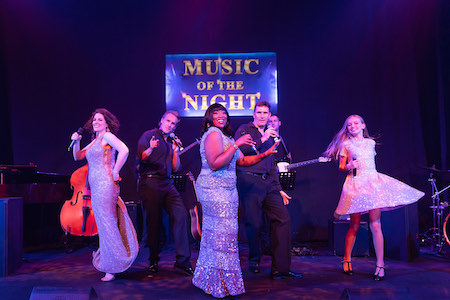 It’s a smart idea to stick to the music of Andrew Lloyd Webber if you want to present a compilation of musical melodies.
Everyone loves at least a few of the prolific composer’s creations, and he has worked with numerous lyricists over the decades to create a catalogue of work that offers something for all tastes.

In Music Of The Night the performers deliver some of the big hitters and some lesser known numbers that add up to a perfectly pleasant way to spend an evening.

It’s cabaret in the old fashioned style, with a live band and five singers in glittery costumes who intersperse the songs with snippets of information about the lyrics or the shows they came from. Like the titbit that Roger Waters of Pink Floyd accused him of plagiarism for The Phantom of the Opera. I listened to Pink Floyd’s Echoes afterwards, and it’s true. 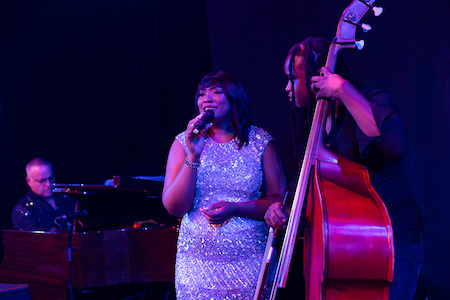 Craig Urbani is without a doubt the star of this production, so at ease on the stage and oozing confidence and sex appeal backed up by his superb voice. When he sings the powerful favourites you have to wish he had been more frequently cast in the musicals we used to see in the good old days when theatres were still fully operational. He is fabulous performing Herod’s Song from Jesus Christ Superstar and tackling the demandingly contorted lyrics of Sunset Boulevard.

His match on the female side is Stephanie Baartman, who adds sass to her numbers delivered in a rich sensual voice, and they share an insouciance that carries the show. It does seem cruel, though, to submit such fine singers to the indignities of anything from the appalling Cats, even if they handle Jellicle Cats bravely.

Carly Graeme also packs a punch in a song I didn’t know well, As If We Never Said Goodbye from Sunset Boulevard. Knowing the other performers personally, Adrian Galliard and his 13-year-old daughter Emma-Jean, makes it difficult to comment without bias, but the crystal soprano coming from Emma-Jean is incredible. 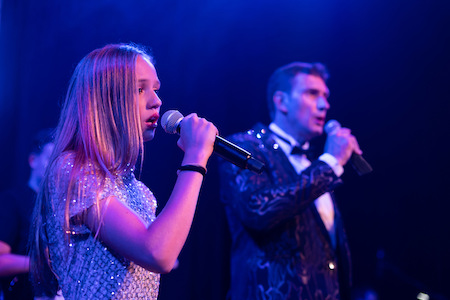 The show, subtitled ‘one composer, many lyricists’, features solos and duets and a few numbers where all five performers sing to mix things up a little, although it carries on at largely the same tempo for all 90 minutes. The band around them is solid, with the musical director Clifford Cooper on the piano and Viwe Mkizwana adding a funky touch with the double bass.

Music of the Night runs at Centurion Theatre until March 5 with tickets from Quicket, then moves to The Dome in the grounds of the National School of Arts in Johannesburg from March 17 - 20. Tickets from Computicket.