More Than A Handful 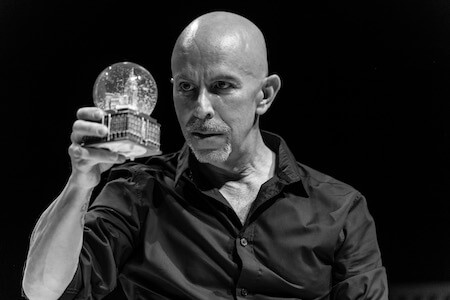 It’s never a surprise to see the name Bryan Schimmel on a theatre programme.

He’s been the musical director for countless large and small productions, many of them as flamboyant as the man himself, like Rent, Chicago, and The Rocky Horror Show. He’s orchestrated music for high-profile events and performers from string quartets and rock bands to hip-hop artists.

Now after decades in showbusiness he’s created a deeply personal one-man show to share the highs and lows of his own story.

The most impressive thing is that he has been brave enough to put together this speech-heavy production at all, since he has a stutter that kicks in at the most inconvenient moments. He doesn’t flinch, and he doesn’t look embarrassed or search for other easier words – he just pushes through and the whole audience is behind him, willing him on. Yet when he sings he doesn’t stutter, so singing became his refuge as a child – safe from speaking and safe from bullying. 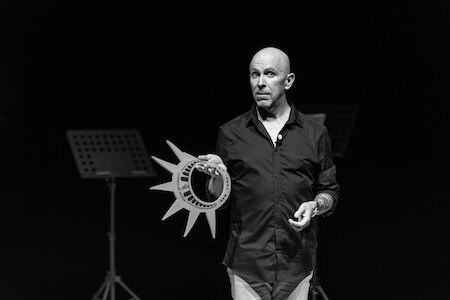 For a man whose whole life is music, More Than A Handful leans more towards the chat than the piano playing, but when he does turn to the keyboard his skills are captivating.

Schimmel has been a troubled soul, and this is a show filled with intimate memories and told without any gloss or attempt to paint himself as flawless. It’s constructed around the letters he wrote to his mother over the years, recording his adventures and missteps. There are stories about his acrimonious relationship with his father, who couldn’t accept that his son was gay and wanted a career in in the arts. As a boy who loved Hello Dolly it was clear that a wife and kids wasn’t in his future, he says, with a camp stance and sly smile.

Schimmel went to Israel to study and to get away from his father, and later headed to New York to prove himself on the global stage. His stories here emphasise how talent in South Africa is seen as precious and special, but in New York it’s a must. His early days there were difficult, running himself ragged holding down numerous jobs to pay the rent while trying to get a break in the theatre. There’s an admirable honesty in the way he relates how the allure of drugs as a recreational sport saw him addicted to crystal meth. New York is the loneliest place in the world, he says. But kudos to him for sticking it out for so long when others would have fled back to the safer shores of home.

One of the productions Schimmel is best remembered for is A Handful of Keys, which he devised with Ian von Memerty as an exuberant two-man, two-piano celebration. It was their director Alan Swerdlow who got him to face his biggest fear by speaking on stage, instead of hiding behind his music stand. Swerdlow has directed this production too, as well as contributed to the writing.

The result is a mixture of humour, music, chatting and  animated acting as Schimmel physically recreates some of his memories. Although there are a few moments where it could be tightened to keep the pace from lagging, it’s a gentle, warming show that reveals the man behind the maestro.

Bryan Schimmel in More Than A Handful runs at Sandton’s Theatre on the Square until April 16. Tickets from Computicket or on 083 377 4969.