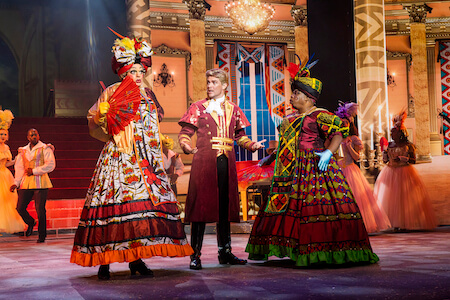 The most spectacular part of Johannesburg’s annual pantomime was usually the magnificent scenery.

Huge sets were imported from England to create a world of glittering palaces, gloomy forests and lively villages that mesmerised the audience and drew wows of appreciation as the curtains opened on each new scene.

This year Janice Honeyman’s annual panto is back after a Covid lull, with a return of the perennially popular Cinderella. But the physical sets have been replaced by locally developed digital scenery. Traditionalists may have some misgivings, but they should be blown away as soon as the curtain rises. The backgrounds crafted by production designer Andrew Timm and his team from Andrew Timm Creative are absolute show-stealers, filling 550 LED screens that form a proscenium arch, side panels, sliding doors and a vast backdrop so the audience sees layers of video that create the illusion of depth. 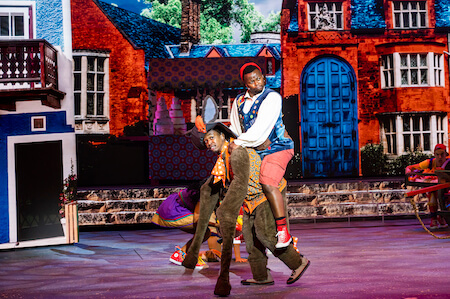 The traditional village is a delightful collection of quaint and colourful houses, with extra liveliness as animated characters walk around. There are Batman-style speech-bubbles saying ‘Pow’ and ‘Biff’ as someone gets his head whacked; flickering candles on the walls; shooting stars; and animal eyes that blink menacingly in the forest at night.

The highlights are yet to come, with the creative team tackling Cinderella’s transformation for the ball in a funny and ingenious way, while her departure in a horse-drawn carriage is goosebump-inducing. Bravo for digital technology.

All these tricks and technical wizardry don't detract from the traditional magic of live performance, and the panto unfolds in its usual formulaic process. There are gorgeous costumes, snatches of pop songs breaking out every few moments, lively dancing, and word plays, innuendos and double-entendres flying around. 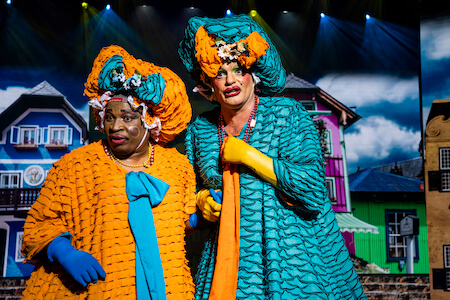 Apart from the initial trepidation about whether a flat-screen backdrop could deliver, there was another early moment of doubt when Dolly Louw as fairy godmother Gogomama burst into song, but her narrating skills are stronger than her singing and the tale soon picked up pace around her.

Ben Voss and Desmond Dube make a return performance as the lusty ugly sisters, and they really have the teamwork cracked. There’s a fizz between them as they caper around being saucy, hilariously un-sexy and politically incorrect.

Then the vivid colours darken to draw us close as Cinderella sits by a flickering fire all alone. Kiruna-Lind Devar makes a lovely Cinders, with a great voice and a personality that adds a welcome independent streak to the girl waiting to meet her prince. Kyle Grant plays Prince Charming as a bit of a Benoni boykie, with a warm heart but not a lot of action in the head.

You can’t help thinking she’d be better off with Buttons, played by the always-excellent Bongi Mthombeni. He really stands out this year, making Buttons funny, charming, vulnerable and an excellent singer. He’s Prince Charming material in his own right. He also has a perfect partner in Justin Swartz as his faithful sidekick, Donkey Houtie. Swartz gives us an agile and cheeky animal, and their great rapport wins lots of laughs. When they lead the inevitable audience participation song you’d feel too awful about disappointing them not to stand up and join in.

Around them the lesser characters and backing dancers are all admirable, delivering a pageant of colour and movement that delights the kids. It’s a nice touch that the live band is worked into the action too, with musical director Dale-Ray Scheepers popping up from the orchestra pit occasionally to remind us of the important role the music plays.

It’s a big, warm-hearted production in many ways, with a tried and trusted formula that has adapted to increase its magic.

Janice Honeyman’s Cinderella runs at Joburg Theatre until December 24. Tickets from R240 from www.joburgtheatre.com or Webtickets, or Tel 0861 670 670.