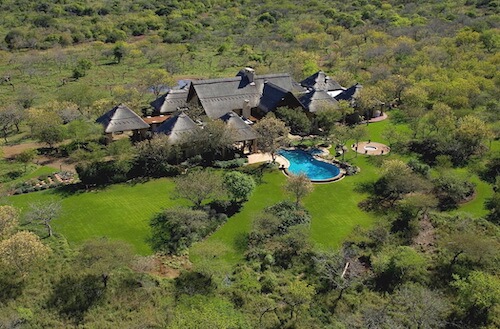 For four years in a row, Villa iZulu in KwaZulu Natal has been named the Leading Luxury Private Villa on the planet in the prestigious World Travel Awards.

The lodge in Thanda Safari, a private game reserve, beat rival nominees in South Africa, Indonesia and Croatia to win the title, impressing the judges with its Afro-chic luxury. When you walk through the entrance hall into the inviting lounge you realise it really does have everything.

The irony is that few South Africans can afford to enjoy the warm welcome from its eight dedicated staff, its five en-suite bedrooms, a gorgeous swimming pool, viewing decks in every direction, top notch food and wine, and excellent Big Five game viewing. 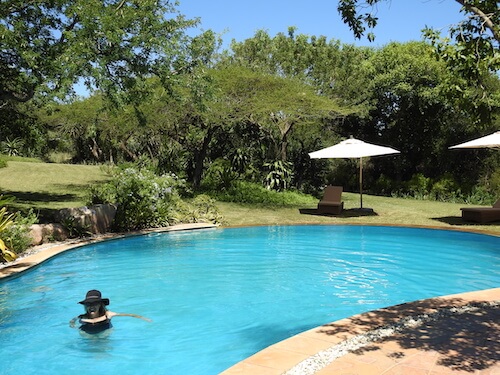 It’s owned by Swedish billionaire philanthropists Christin and Dan Olofsson, and it’s usually occupied by foreigners who don’t flinch at the high season fee of R104,492 per night for 10 guests. But things are changing now that foreigners are absent.

The villa is promoting its lower rates for Southern Africans, and has just welcomed a media trip by local journalists, who, let’s be honest, couldn’t afford the SADC rate of R60,060 a night even if we haggled.

Then again, just maybe it’s worth it. At R6,000 a night each for such luxurious surroundings, all meals and drinks and two daily game drives, it’s far cheaper than many other safari camps that can’t claim to be a four-times world champion. When you add in a free lesson from the resident wildlife photographer Christian Sperka, and the fact that you’ll rarely see another vehicle in the vicinity, it starts to sound like a positive bargain. 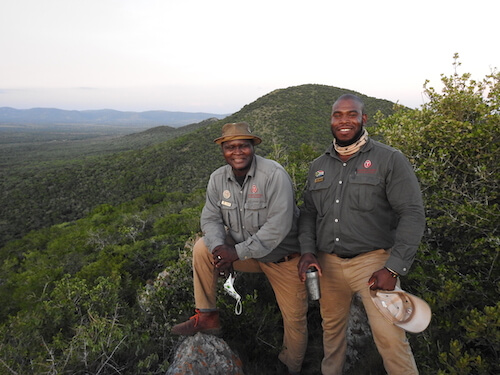 The managers are also playing with fresh ideas to hopefully bump up visitor numbers and keep its staff employed. Among the plans are socially-distanced concerts in the bush, speakers like the Zulu historian Rob Caskie, Pilates wellness weekends, wine estate weekends and black tie balls. Also new is a package that includes a helicopter safari, a flight to the beach for a braai, and taking part in a rhino dehorning mission. Since the bookings are ticking up, it’s clear that not all South Africa’s well-heeled elite have fled the country.

We didn’t need the villa’s helicopter pad or separate accommodation for bodyguards, but we certainly made good use of the two chefs, the butlers and our dedicated ranger and tracker, Buselaphi Mngomezulu and Winneth Khumalo. They led us on fascinating drives, letting us linger at each sighting because there were no other vehicles waiting their turn. 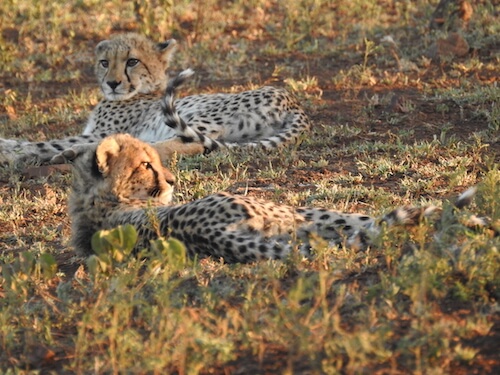 Cheetahs weren’t doing well here until the rangers cleared a large tract of land where they could run and hunt without getting cornered in the bush by lions or wily hyenas. One cheetah brought in to restock the population was a female with a broken foot, which they nursed to health in a boma and released. A few weeks later she was losing condition and was taken in for more medical care – and gave birth to three cubs in the boma. As he’s relating the story, Mngomezulu points to a little blob in the distance. The mother, not limping now, and her three fur-ball cubs.

One morning Mngomezulu leads us on a bush walk tracking elephants. He points out the wrinkly patterns of pads the size of dinner-plates, then some rhino tracks that crossed their path. Soon we’re on the tail of lion, with a swirl of pawprints indicating that two lionesses had been on the hunt, chasing down supper for their five scrapping, tussling cubs we’d watched with delight the previous day. 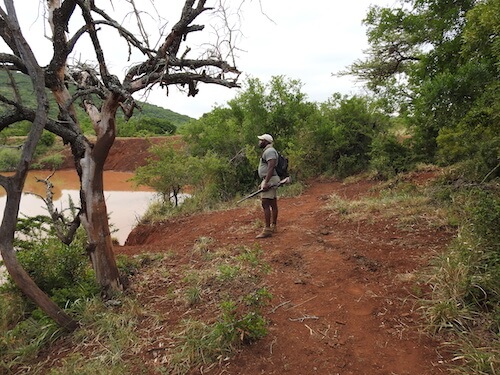 We walk on through the thickets, careful not to snap any dry twigs that would give away our presence as we stalk near to the white rhino. I bob about in vain behind a bush trying to spot them, until I move a fraction to the left and clearly see a mother and calf just 100m away. The mother, even more short-sighted than me, knows something is afoot but gradually settles down again to graze.

Thirty minutes later we track two more rhino to a waterhole and watch them wallow in the mud, while Mngomezulu keeps an eye on a solitary inquisitive buffalo watching us watching them.

Kent Lovelock, a rhino monitor with Thanda’s wildlife team, knows exactly how easy it is even for amateurs like us to approach rhinos unseen. That makes them an easy target for poachers, but the last incident at Thando was a few years ago thanks to the efforts of its experts and a good relationship with the surrounding communities. The reserve employs a huge amount of local people and trains them up for the jobs, rather than bringing in already qualified people from other provinces. 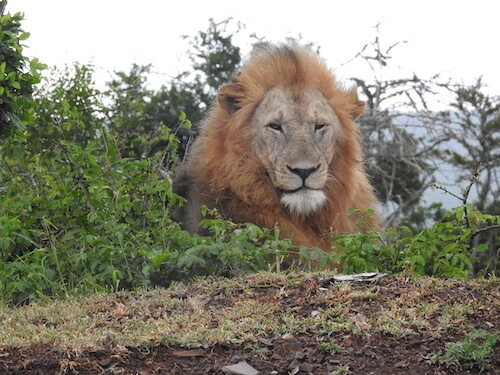 Lovelock’s team goes out frequently to track and observe the rhino and check their health, preferably without being noticed. Their job is to gather data, working separately from the Anti-Poaching Unit, who focus on security and fending off incursions.

Wealthy guests can help by sponsoring a dehorning project for about R30,000, funding a helicopter team to fly in and dart rhinos tracked by foot patrols. A medical team removes the horns to deter poachers, takes DNA samples, and notches the animals’ ears to identify them. The guest can join the mission, giving them huge bragging rights and the satisfaction of making several rhinos less appealing to poachers.

Thanda also works with the WWF’s Black Rhino Range Expansion Project (BRREP) to create new populations in safe areas where the animals have been depleted. The reserve acts as custodians for rhinos that are relocated there, and monitors them to collect data. Every other calf is returned to the project for release in areas where they are trying to introduce them or expand the gene pool, while the rest remain at Thanda. “It really is very clever and we’ve had a large amount of success,” Lovelock says. 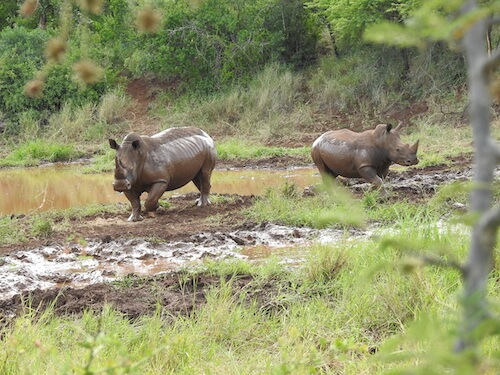 Africa’s rhinos have been reduced over the last 60 years not only through poaching, but also from the sheer crush of humans encroaching into their territory. Estimates released at the end of January by the Ministry of Forestry and Fisheries and Environmental Affairs show that Kruger National Park populations have plunged to 3,529 white rhinos, a 67% dive from 10,621 in 2011, and to just 268 black rhinos, a 35% dip from 415 in 2013.

The figures suggest that the slaughter hasn’t just reduced because of anti-poaching efforts, but because the few remaining victims are harder to find.

Even so, Lovelock believes that rhinos can be saved thanks to private initiatives. “If there’s anyone that can do it it’s the game industry in South Africa, because we look at rhinos as an asset. It sounds bad, but if it pays, it stays. The areas that are owned privately give us the opportunity to bring the numbers up and save them,” he says.