Shedding clothes and woes in the Namibian sun 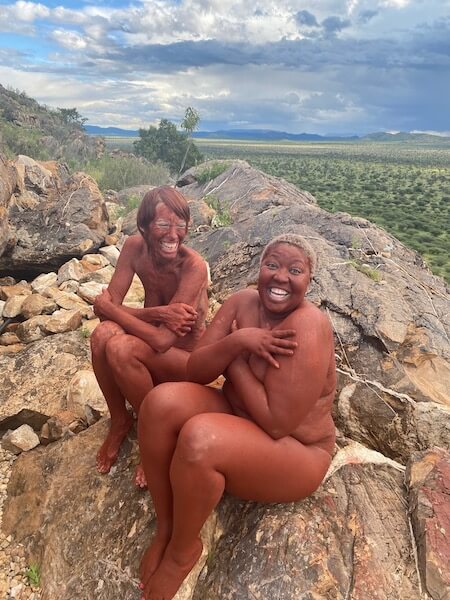 We must have looked ridiculous, standing naked on the side of a mountain being plastered from forehead to feet in a gloopy mix of red ochre and Greek yogurt.

As our clay cocoons began to dry in the sun my new Namibian friend and I posed for photos then showered off, laughing joyfully at this liberating loss of clothes and inhibitions.

The Himba women who inspired this Hematite Full Body Mask treatment will leave the red ochre on for days to protect their skin from the sun, our wellness therapist explained. The Himbas also infuse their skin with the sweet smoke of burning myrrh to keep themselves smelling nice, since water is too scarce to waste on washing in the Namibian desert.

I’d already experienced the mildly relaxing effects of myrrh smoke when I checked into Habitas Namibia, where a welcoming ceremony sees the perfumed resin sprinkled on a fire while you’re encouraged to relax, reconnect with yourself and be present in every moment. “We’re about luxury for the soul, not chocolates on the pillow,” smiled Salome Johannes, the receptionist. It may have been the smoke inhalation, but I really did feel an instant mood elevation when I arrived at this luxurious lodge.

For a place billed as a wilderness camp Habitas Namibia is remarkably easy to get to, since it’s only 45 minutes from Windhoek airport. The last 10 minutes is spectacular, bumping up a mountain track and looking down on a vast savannah fringed by the Auas Mountains. 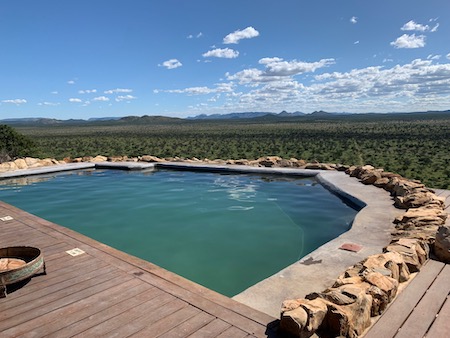 Habitas lodges were founded in Mexico by an artist and a musician who wanted to permanently capture the heady feeling of the Burning Man festivals with their focus on inclusivity, giving, communal effort and leaving no trace. There are now two lodges in Mexico, one in Saudi Arabia and this one in Namibia, on the 50,000 hectare Marula Game Reserve.

It all sounds a bit fanciful on its website with phrases like: “We believe life is bigger than our work, our worries, our routines. Because life can be taken away from us in an instant, and we never know when we’ll see our last sunset.”

Then you arrive to welcoming smiles, absorb the stunning view, and sign up for everything because your mindset was shifted by the Covid pandemic and you want to experience all this ethos promises.

The physical touches include off-the-grid electricity from a bank of solar panels, the minimal use of plastic, and low impact buildings of stone, wood and canvas. The main lodge has solid walls and a large tented roof, cleverly shaped into peaks to reflect the jagged mountain peaks behind it. 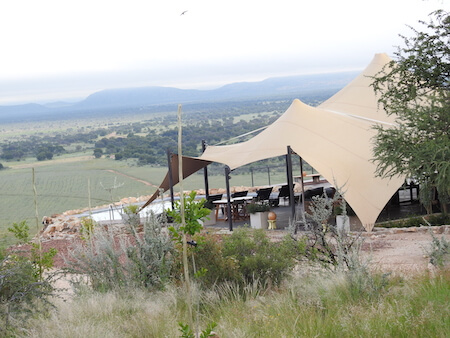 But it’s the emotional feel rather than the physical structure that beguiles you. The staff chat warmly and laugh freely, and hold optional activities every day to help the guests get to know them and make friends with each other.

The wellness manager Ru Hansen offers sunrise yoga sessions, but didn’t mind when I negotiated a later start to let the sun rise by itself while I enjoyed a lie in. The absolute silence and utter darkness of my tented suite were treats I didn’t want to miss.

The yoga deck clings to the side of the mountain with views rolling on forever. But Hansen has us close our eyes first to listen to ‘the symphony of nature.’ Birds were squabbling in the bushes, until the perfectly timed roar of a lion in the distance made me open my eyes and grin at the sheer magnificence of nature.

Another communal activity is a folklore hour, and when no other guests arrived, it was just me and some staff swapping tales of our childhoods and our future dreams. It was a real treat to hear the stories of the guide, the bushman tracker and the beautician. All very different, and now all very connected. 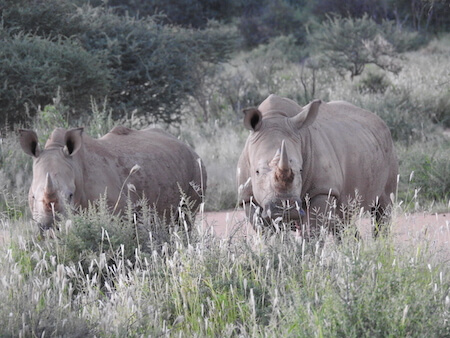 If communal activities aren’t your thing it’s perfectly acceptable to chill by the pool, visit the spa, or relax in your tent. The 12 tents each have a wooden deck with a day bed, and mine had a little koppie where the dassies played.

On the practical side this isn’t the place to go for a big five safari. The reserve it stands it could accommodate far more animals than it currently has, so sightings on the game drives can be a little scarce. The lions and elephants are also kept in a separate area to limit their destruction of the other animals or the landscape. The reserve has been patched together from several farms since 2016, and hopefully as it becomes more established it will be better stocked and the final internal fences dropped.

Despite those misgivings my guide Ronny Silimwe found us several rhinos, stately oryx and other assorted wildlife. Then when we crossed into lion territory we spotted a male elephant that Silimwe described as a grumpy soul who likes you to keep your distance. 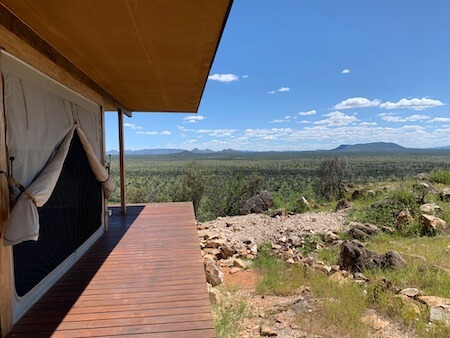 Serious rain had made the landscape lush, with tall grass vying for space between colourful shrubs and dense bushes. Fortunately one lioness had wandered out into a clearing, so we parked up and settled in to watch. Soon the blades began to twitch and a shaggy head popped up, as a male cut a swathe through the grass to join the female. Then another male appeared, followed by three cubs. Dusk had also arrived, with a blazing sunset on one side and a full moon on the other. Time to retreat and leave the lions to hunt.

Bush walks here are led by tracker Paulus Kambathe, a descendent of the bushmen. He carried a quiver made of bark and animal skin, and pulled out a tiny arrow far more effective than its petite size suggested. Dipped in snake venom it becomes so lethal that it would kill him if it even scratched him, he said. He told stories of how his ancestors hunted and wooed, married and died. Sometimes the older tribesmen died in a taste test when new plants were discovered and fed to the oldest and weakest first. If they were still healthy after a few days, it was added to the menu. 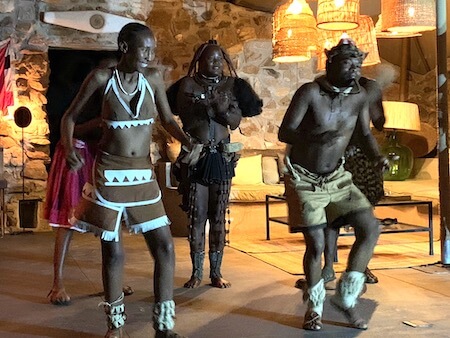 Our food caused us no such concerns, with the chefs devising dishes that draw from the other Habitas centres too, with Mexican and Arabic flavours. A special SADC rate of R4,500 per room per night with meals and drinks included has been attracting the locals, and I shared a dinner table with the other single lady and three couples from Windhoek who came for the weekend.

One evening our game drive was cut short when more unexpected rain fell in a deluge. Silimwe handed out waterproof ponchos and headed home, where a troupe of dancers from Windhoek were waiting to perform. The plan had been to finish our drive in a clearing for an al fresco dinner after the cultural show, but instead the furniture was pushed back so they could perform in the lodge.

Namibia still has various distinct tribes, and the horn-blowing chief introduced them all in turn. It was audience participation, of course, so I danced with the Himba lady, admiring her skin kept clear and smooth by the magic properties of red ochre.

Stones was a guest of Habitas Namibia.  First published in Business Day.