A magical peek into a tiny, watery world 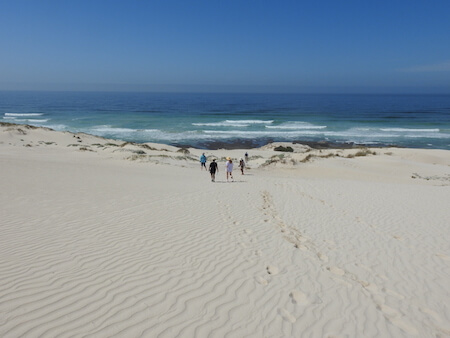 Crouching on the edge of a rock pool I lower my hand gently into a clump of kelp and feel a tentative nudge from something solid.

The touch grows firmer and I peer in to see rows of little white suction pads taking hold. Two brown tentacles are snaking up my wrist, while a third explores my palm. The force increases as the octopus decides I might be edible and tugs me towards his lair. I laugh and apologise that I’m not coming in for lunch, and entwine my fingers with his tentacles until a wave rushes in and breaks the spell.

Shaking hands with an octopus is a magical moment, and I’m astonished when our guide Lizo Msululu says he finds an octopus on most of his marine walks at De Hoop Nature Reserve.

While nature walks usually involve looking for animals or birds in the bush, a marine walk takes you into a secret world where life and death battles take place every time the tide goes out. Each isolated rockpool has something to discover, with a flash of little fish dashing this way and that, sculking crabs, spiky urchins in jewel shades of red, blue and purple, or a piece of hollow kelp stem that Msululu plays like a tuba. 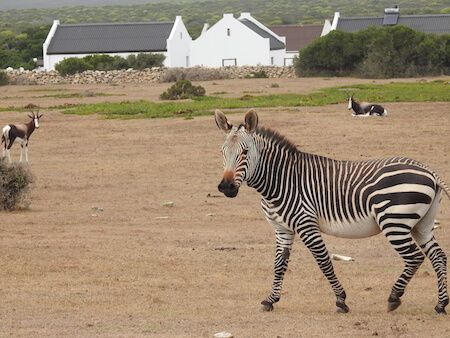 Even the names are evocative, with seaweed called tongue, sea lettuce, and old man’s dead fingers. Msululu reaches into another pool and detaches a turban snail, which retracts its body and closes a trapdoor to protect itself. I gently prod the tentacles of a soft orange anemone and watch as it zips itself into an impenetrable ball.

Then he shows us some duck’s foot limpets that cultivate their own food by covering a patch of rock with saliva that black algae feed on. During high tide the limpets move around their gardens, weeding out unwanted algae and eating the tasty varieties. It’s a cut-throat world down in these miniature aquariums.

What is also astonishing is that great swathes of rocks exposed by the tide are covered by millions of mussels, all crammed together so you’re walking on a living carpet. When I ask why there are so many, Musululu tells me that this is what the seashore could look like everywhere if man didn’t interfere. This rocky shore is so pristine that it’s hailed as an area of scientific value and serves as a benchmark for measuring environmental changes elsewhere. 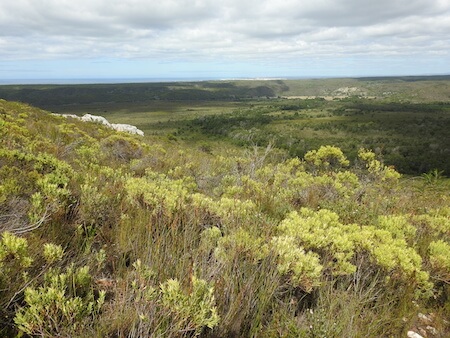 De Hoop has also earned other global accolades, including being a World Heritage site and boasting the largest biodiversity of intertidal creatures anywhere in the world. It’s one of the country’s best sites for whale watching too, from June to November, but even if you miss those giants, the far tinier creatures on the shore are beguiling by themselves.

The scenery beyond the shore is equally spectacular, with a vivid blue sky over sand so blazingly white that the guides wear double sunglasses for protection.

A few hours later we turn our eyes upwards for some stargazing, with the entertaining Dillon Visagie leading us by torchlight to the banks of a large vlei. A few clouds are blocking patches of the universe, but we see enough to feel awed by the enormity above us. De Hoop really is a place where being a human can make you feel very insignificant.

But it’s human intervention that has done so much to preserve it, by defending it from other humans. This Marine Protected reserve in the Western Cape is a ‘no take’ zone, so you can’t slip any pretty shells into your pocket. Nor can you swim in the vlei, to avoid disturbing this 19km long wetland recognised as internationally important under the Ramsar Convention. What you can do is take an eco-boat trip, with a guide pointing out wildlife like darter birds, chugging along the water with only their heads and snake-like necks exposed as they hunt for fish.

The solid, earthy part of De Hoop is covered with 1,500 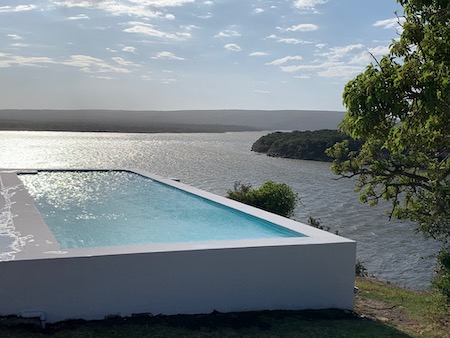 different varieties of plants and fynbos, and home to one of the country’s largest herds of bontebok, interspersed with zebra, eland and ostrich. One morning we leave the reserve then drive back in again further down the road, since even the guides aren’t permitted to drive across some of this precious land. We’re off to see the Western Cape’s last surviving colony of endangered Cape Vultures, high in the cliffs of Potberg Mountain.

It's a steep hike to a viewing platform, and once we arrive we scan the skies for the elusive birds. There are supposed to be about 300, but only four or five are swirling overhead. I’m convinced they were teasing us, because when we reach the vehicle again a sweaty hour later we see 40 or 50 circling the viewing platform in elegant loops, reappearing now the humans have scarpered.

The last time I visited De Hoop was in 2013, when our guide was the young and enthusiastic Dalfrenzo Laing, a former petrol pump attendant with a rich accent and a cheeky grin. When he was made redundant he was given the chance to train as a guide and sponsored to attend the country’s first Marine Guiding Course. He’s now the assistant manager, and has helped about 35 other young men and women from the poor surrounding areas to gain the knowledge they need for a guiding career. Soon he’ll sit some exams to become an official instructor himself. 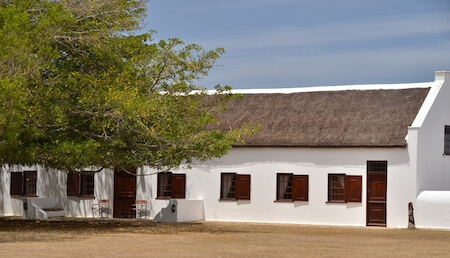 For visitors the reserve has a variety of accommodation run by the De Hoop Collection, with historic buildings that once formed a working farm renovated to sleep a limit of 174 people. They include the original Manor House dating back more than 270 years, and some surrounding buildings that have been turned into airy bedrooms.

Across a grassy paddock is the Fig Tree Restaurant, named for a row of trees so enormous that you stop and stare every time you walk beneath their sprawling canopies.

The impressive Silo Wine Cellar is also here, designed as an oval that holds more than 3,000 bottles. I fell into the delightful habit of collecting a glass of rosé wine before heading out to the deep swimming pool overlooking the vlei.

Even if you’re self-catering it’s worth sampling the restaurant, which opens for breakfast, lunch and three-course dinners. A rich mussel chowder - made with mussels brought in from outside the reserve – is delicious. But you won’t find octopus on the menu.