Say hello to the Seychelles 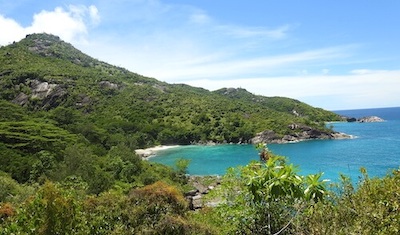 While the rest of the world was worrying about Covid late last year, my main fear was being hit on the head by a falling coconut.

Or perhaps twisting an ankle on the mountain trail I was hiking to reach a secluded bay in the Seychelles. There was also a risk of getting spiked by a sea urchin in the warm, clear ocean, but all went well, of course. I enjoyed the scenic hike through Morne Seychellois National Park on Mahé island, and snorkelling from Anse Major beach was fabulous when I was magically swirled up in a shoal of silver, shimmering fish. And the nearest I came to a coconut-induced headache was from too many pina coladas back at my hotel.

I visited the Seychelles last December during a window of relative travel freedom, when this remote paradise seemed blissfully far from the global pandemic. The main concern was whether the airlines would keep flying when so few people were travelling. That all that changed a few weeks later, and right now South Africans aren’t allowed to enter. But start saving, because when the borders open, the Seychelles ought to be on your wish list. 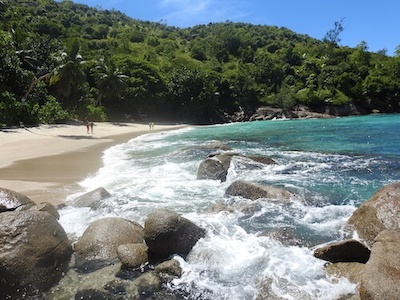 This scattering of 115 Indian Ocean islands wasn’t quite what I’d imagined. I thought they’d be similar to Mauritius, if more expensive, because surely one tropical island is very much like another? Swaying palms, golden beaches and a turquoise ocean so clear that you can see the bottom.

The Seychelles has all those, but everything here feels more pristine. The islands are made of granite, with massive boulders adding a spectacular touch to the beaches and forcing the roads to twist through hairpin bends across the mountainous interiors.

It’s like flying back in time to a slower, simpler, safer way of life, with tiny villages strung along the coastal roads that circle each island. Mahé’s most popular holiday area, Beau Vallon, has a glorious long beach backed by just a handful of streets before it fizzles out again. The downside is that you can’t grow much on granite, so food and drink is pricy because most goods are imported. 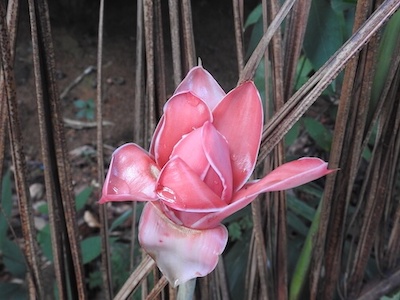 Conservation is high on the agenda, with a Ministry of Environment, Energy and Climate Change and numerous NGOs protecting its plants, animals and seas. Laws ban any buildings within 25m of the high tide line, and using sunbeds on the sand is outlawed to prevent erosion, says John Narain, sales manager of the Constance Ephelia resort on Mahé.

I spent two days at the Ephelia, which spreads across a spur of land jutting into Port Launay Marine Park. The rooms aren’t described as having a sea view, Narain says, because if an exuberant frangipani or palm trees are in the way, they won’t be axed to clear your view.

The Ephelia is so spacious that it never feels crowded, although people gather for the daily feeding of its giant tortoises, which is well worth witnessing. 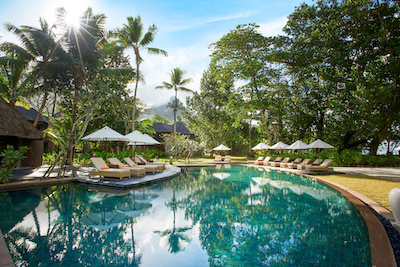 Late one afternoon I waded into the warm ocean and watched moody clouds muster the energy to unleash a brief tropical storm, and I laughed in delight as fat raindrops pummelled the water around me. Later I dressed up for dinner at the Cyann, the resort’s French fine dining restaurant, with a chef who conjures up delights like saucy scallops and flash-seared tuna.

In the capital, Victoria, the small but excellent National Museum of History tells stories of pirates and buried treasure, uprisings and independence. The Seychelles were uninhabited when the first recorded landing was made in 1501, then in 1770 a settlement was established by French colonisers from Mauritius.

The economy was built on the sweat of slaves from Madagascar and Mozambique, while criminals, dissidents and rabble-rousers from various French colonies were exiled here. That mixed heritage of captives and criminals has somehow blended into a peaceful, integrated community. 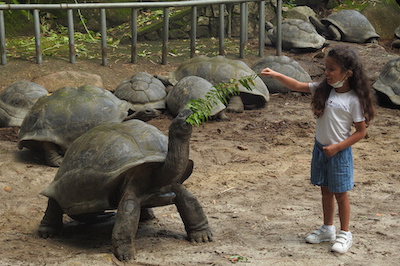 The Botanical Gardens on the outskirts of Victoria are a great place to hunt down exotic jackfruit and durian trees, or the coco de mer, a palm tree with male and female versions unique to the islands. The female produces giant nuts that weigh up to 45kg and resemble the female pelvis. It’s such a cheeky rarity that there’s a whole poaching and smuggling scene going on.

Other endemic oddities are Aldabra giant tortoises, and I spent ages in their enclosure dodging their massive feet as they jostled each other to chomp the leaves I fed them with.

You can embed yourself in one location for your entire holiday, but island-hopping is a brilliant way to gain a fuller experience. The second largest island is Praslin, reached by ferry or a thrilling 20-minute jaunt over stunning seascapes in a tiny plane. 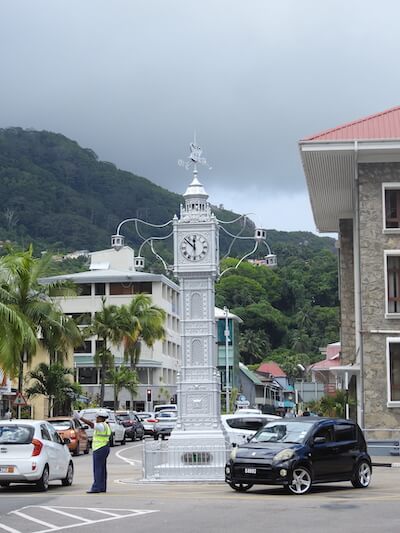 My base here was the Constance Lemuria, which is so keen to preserve the environment it benefits from that it has its own turtle manager. The affable Robert Matombe protects the green and hawksbill turtles that nest on its beaches and welcomes guests to his eco-hut to learn more about them. “Everywhere you look you will see life. It’s a small world – we need to share it,” he says.

A female turtle lays roughly 1,000 eggs in several batches every two weeks. But from all those potential hatchlings, only about 10 survive to maturity. Matombe patrols to log the nests and, if necessary, digs the babies out if they struggle to emerge from the heavy sand.

A quick ferry trip from Praslin takes you to La Digue island, where everyone tootles around on bicycles. I pedalled along the coastal road to Anse Source D’Argent, hailed as one of the most photographed beaches in the world. What makes it more spectacular than the usual combo of golden sand, clear water and lush palms are the granite boulders that spill into the water, encouraging the agile to climb up for a selfie.

Cuisine in the Seychelles naturally revolves around the ocean, with flavours influenced by the diverse nationalities that have blended together over the last two centuries. The Lemuria’s most upmarket restaurant is the joyfully quirky Diva, where yellowfin tuna tataki made a delicious starter, followed by a choice of Creole chicken breast or black cod. Dessert was a passionfruit tube with coconut ice cream, which all melted theatrically when the waiter poured hot chocolate sauce on top.

It was an apt reminder that beauty and even life itself are transient, but exploring the Seychelles gives you a chance to revel in both. 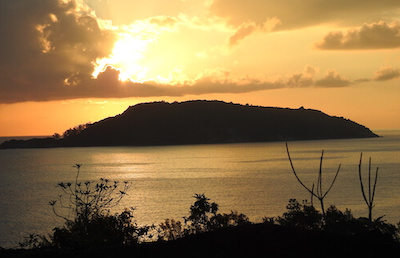