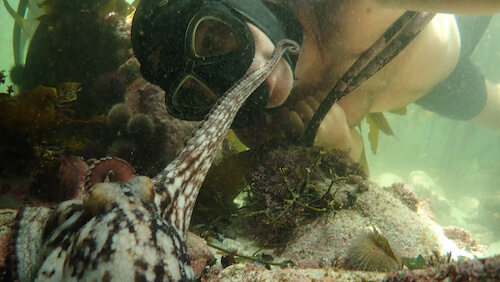 When the little octopus reaches out a tentacle to touch the hand of diver Craig Foster, it’s utterly exquisite.

A sea creature and a human have formed a bond that feels as emotional as it is physical, and it seems to open a new world of possibilities. The experience certainly changed the life of Craig, a filmmaker suffering from burnout who went back to the ocean of his childhood near Simon’s Town to try to reconnect with nature and with himself.

The amazing world he discovered through his daily swims in the kelp forests has been turned into My Octopus Teacher, a magnificent and intimate documentary. It's being broadcast internationally as the first Netflix Original Documentary to come out of South Africa. 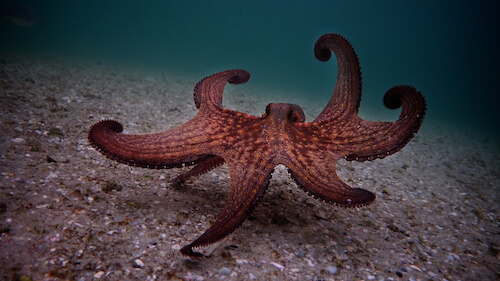 The film blends the life story and remarkable antics of the octopus with a narrative that captures the changing emotions and attitudes of Craig as he befriends the little being. The footage is incredible, and the music, the natural sounds of the ocean and the story line keep you amazed and engrossed in the unfolding drama.

“The animals are very strange and exotic – much more extreme than our maddest science fiction,” he says, as we watch mysterious creatures in all their colourful variations.

The water temperature of about 8ºC takes your breath away, Craig says, but there’s a 10 to 10-minute window where “suddenly everything feels ok. The cold upgrades the brain because you’re getting a flood of chemicals every time you immerse in that cold water. Your whole body comes alive.” 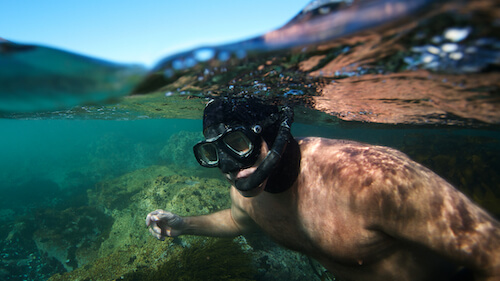 He swims without an oxygen tank or a wetsuit, freediving through the massive fronds of waving kelp. “If you want to get close to an environment like this it helps tremendously to have no barrier,” he says. His lungs gradually gained the strength to stay under water for long periods, but I couldn’t help watching for any breaks in the filming where, surely, he must have come up for air. He can old his breath for six minutes, and the film’s director, Pippa Ehrlich, can hold her breath for four minutes.

“If you’re underwater for two minutes that’s a pretty long dive, but when you’re so focused you can hold your breath for much longer than you think. Your chest starts convulsing, but at that point you’re only half way through your air,” Pippa says. “If you can relax you can keep going, and if something amazing is happening like you’re meeting an animal for the first time you can push through those convulsions.” 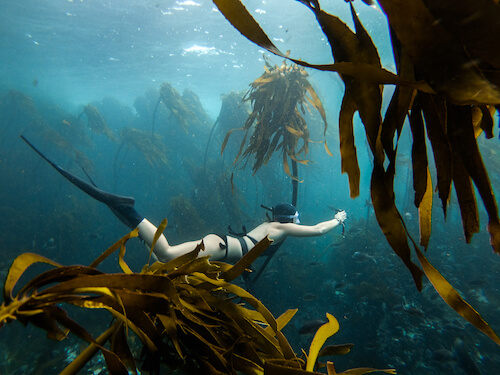 Craig would also put the camera on the seabed and leave it to record without him there. He does that when he first sees the octopus, leaving the camera outside her den, and we see her suckers explore all over it as she investigates this strange new object in her neighbourhood. Then we follow her as she learns how to catch a lobster and hide from predators, and it’s astonishing to see her body change shape and colour to match her surroundings.

She’s an amazing creature with a clear intelligence and emotions, and as Craig visits her every day, the bond that forms between them is obviously mutual. When a shark attacks her and he decides not to intervene in nature, her expression seems to be pleading with her new human friend for help.

The process of creating the movie around her life story took almost a decade, although the octopus herself only lived for 18 months. Much of the time was spent sifting through countless hours of footage and driving the story line cleanly, despite various competing angles that could have taken it off at a tangent. 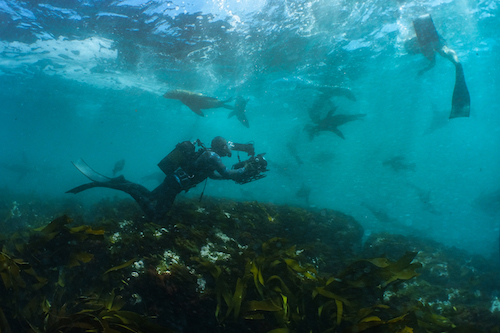 As well as being an award-winning filmmaker, Craig is a co-founder of the Sea Change Project, a community of divers dedicate to protecting the kelp forest. The message of conservation takes a backseat here, although the core Cape Town crew insisted on keeping the very personal aspect of human development. Our place as part of the ecosystem, not an exploiter of it, is subtly reinforced as Craig describes how the encounters with his octopus teacher changed him personally.
His patch of kelp at Simon’s Town forms part of the Great African Seaforest, which stretches 1300km along the coastline up to Namibia. This vast undersea wilderness is home for thousands of animals, many of which are found nowhere else in the world.

This beautifully filmed and narrated story set in this unusual territory is an absolute delight.

* My Octopus Teacher is directed by Pippa Ehrlich and James Reed, produced by Craig Foster, with an original score by Kevin Smuts. Winning an Oscar for the Best Documentary adds to a list of accolades including Best Documentary at the Baftas, the Best Feature category at the Earth X film festival and eight nominations in the Jackson Wild Media Award, one of the most prestigious competitions for nature films.

Absolutely stunning and beautiful. I am a mental health professional and seeing only the trailer is touching all my senses.

I loved it. Beautifully photographed.

OMG. I just “happened” to find this film. I was absolutely totally mesmerized by the whole thing. I want to thank you all for sharing this truly spiritual experience with all who are fortunate enough to find it.
My experience with this movie encouraged my belief in my wonderful Creator God. No way anything could be all that the octopus is without a grand design.
Blessings to you all!

The most spectacular amazing movie I’ve ever seen. I think it will cause many to try to reconnect with nature in some way. I’ll say one thing: octopi are really resourceful and smart.