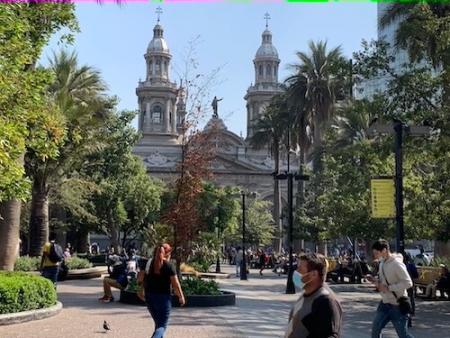 The first time I came to Santiago, five years ago, I cried.

I was in a museum chatting to a woman at a display devoted to people who ‘disappeared’ during Chile’s years as a dictatorship. As she described some of her friends who simply vanished during those brutal years under Augusto Pinochet, we were both moved to tears.

Yet outside the Museum of Memory and Human Rights the streets felt joyful, safe and lively. There were exuberant buskers and vendors selling eclectic goods from makeshift stalls or blankets laid on the pavements. The city centre was full of grand colonial buildings and inviting cafes, while men were playing quick-fire chess at tables set out in the Plaza de Armas.

I like it here, I thought, I could live here for a while.

Now I’ve just finished my first month in a city big enough to be exciting and small enough to be manageable. I’ve rented a little apartment looking directly at the snow-capped Andes - an astonishing site I hope I’ll never tire of.

Santiago extends across a narrow plane wedged between the Andes and other mountains bordering the Pacific Ocean in this long and skinny country. Every suburb seems to have a central hub of activity, crammed with pubs and cafes, bakeries and grocery stores. All around them are apartments blocks, so the residents are never more than a few minutes from the amenities. 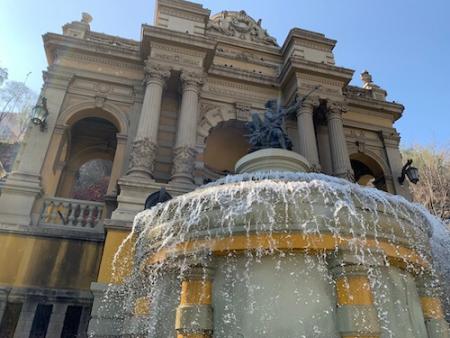 The Museum of Memory is still there, but the young people don’t seem to know or care much about the past. Some have never even heard of Villa Grimaldi, which was commandeered by Pinochet’s intelligence forces and used as a torture and execution centre. The villa itself was destroyed to hide the crimes, but an excellent English audio guide fills in the gaps.

I’m fascinated by the past because I want to understand the present. Chile’s new young president Gabriel Boric was a former student protestor himself, but there’s skepticism about whether he can make the reforms he’s promising, given his inexperience and some strong opposition.

I’m seeing many similarities between Chile and South Africa, with rising crime, xenophobia, poverty and inequality. On Workers’ Day I watched hundreds of protesters marching through the city centre, but further on it turned violent and journalist Francisca Sandoval was shot and later died.

Yet by Johannesburg standards it’s still liberatingly safe and remarkably efficient. The public transport is excellent, and a Bip card – named for the noise it makes when you tap it on a reader – lets you jump on the buses and metros and get pretty much everywhere you need to go. 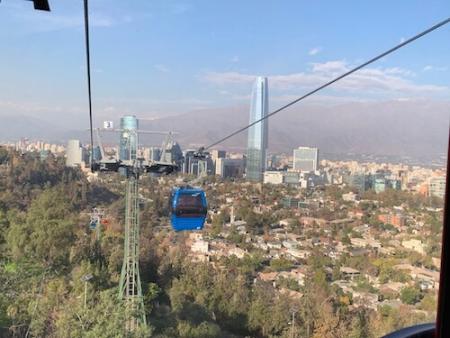 One day I caught a bus to a craft market behind Los Dominicas monastery. Dozens of little studios house artisans working with leather, gold and silver, precious stones, wood and weaving. A silversmith showed me how he flattens the metal and softens it with a blowtorch, while a man bearing the features of the ancient Mapuche nation chatted about the precious gems he works with.

Another fun excursion is the cable car up Cerro San Cristóbal, a foothill of the Andes that’s been domesticated with a swimming pool halfway up and a church at the top. There are brilliant views over Santiago and into the hazy distance.

Across the city at Quinta Normal Park the red and russet leaves are tumbling in the chilly autumn breeze. There’s a wacky multi-coloured building here that houses the Artequin Museum. The building itself was designed for the Universal Exhibition in Paris in 1889 and is now a National Monument. Inside are reproductions of famous artworks, with Andy Warhol’s Marilyn Monroe and Leonardo da Vinci’s Mona Lisa within air-kissing distance of each other. It’s a happy place designed to inspire a love of art and creativity in kids. 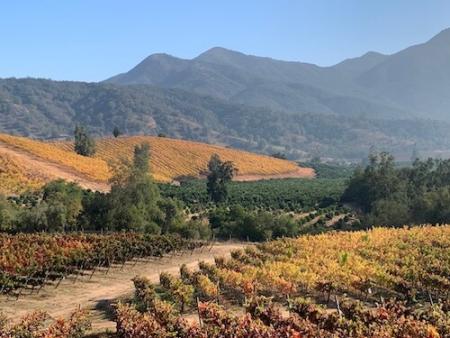 The Natural History Museum across the park boasts a huge whale skeleton hanging in the arched main hall. There’s a strong conservation message too, and dioramas that show the flora and fauna of Chile’s diverse regions, ranging from desert to glaciers by way of temperate vine-growing regions.

The wines are delicious, but I’m not yet convinced about a bizarre concoction almost touted as Chile’s national drink. It’s called mote con huesillos, with heusillos meaning bones. That part refers to a reconstituted dried peach that each glass contains, along with syrupy peach juice. So far so good, but then they add grains of cooked wheat, supposedly derived from the Mapuche tradition of serving wheat with everything. Balancing a wrinkly peach on a wooden spoon to bite into it is fine, but after chomping on the wheat I reckon I’ll stick to wine. Or pisco sour, a tangy, potent cocktail based on distilled grape juice.

The vineyard close to Santiago are spectacular with their backdrop of the Andes. I met one tour guide by chance when I was exploring Santiago’s bohemian Bellavista suburb and he warned me to put away my camera. I laughed and said as a Joburger, I was more likely to mug someone myself than be mugged. When he told me his company Andanzas Andinas runs tours to the vineyards I joined him on a trip to Casablanca Valley. We sampled excellent Chardonnays and Chile’s most popular varietal, Carménère, with the sommeliers giving us tours and tastings in English. 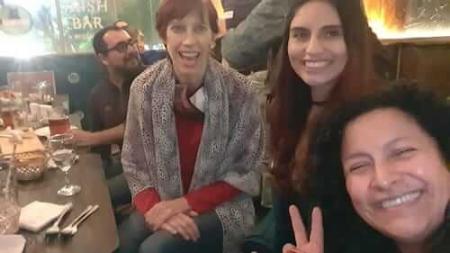 o make more friends I’m attending events where people are keen to practice different languages, and we bumble along in our happy blend of Spanglish. Old bars like the California Cantina and Casa Conejo (Rabbit House) are fascinating to explore, with a warren of smaller rooms branching off up the twisting stairs. The waiter might take a while to find you with your drinks, but the places are warm and welcoming with their inclusive ambience.

Nightlife here starts quite late and goes on even later. At 10.30pm when I’m thinking about leaving, others are just arriving. The streets are bright and still buzzing as I walk or catch the bus home, grinning madly at the excitement of trying a new life in a new country in a new language.

The Pisco Sour is the national drink. (Although some Peruvians May dispute this!) Have you tried the Terremoto? I really appreciate your inclusion of the elements of the dark Pinochet period. I actually don’t think I had any bad wine while in Chile for 6 years and hosting almost monthly wine tastings where participants were limited to spend under 15,000 CLP (about $10 - $12 US)