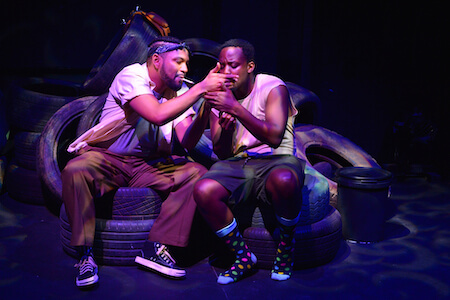 It’s a rare treat to watch a play so mesmerising that you don’t take your eyes off the stage for a second. Not even to glance and see if the rest of the audience is enjoying it too, because of course they are.

The atmosphere in the Market Theatre fairly crackles with tension as The Brothers Size transports us into the lives of three black men in Louisiana. The impeccable script was written by Tarell Alvin McCraney, who later won an Oscar for the Best Adapted Screenplay for Moonlight, the film based on his play In Moonlight Black Boys Look Blue.

His writing here is tight, funny and tragic, and the play has returned to Market Theatre as this year’s offering for Black History Month. Last time it was presented by American actors, but now local actor fill the roles and they’re absolutely excellent. They speak with American accents that are convincing but thankfully not too Deep South so we never struggle to understand their words. That’s vital, because all their poetic words and heartfelt speeches are well worth hearing. 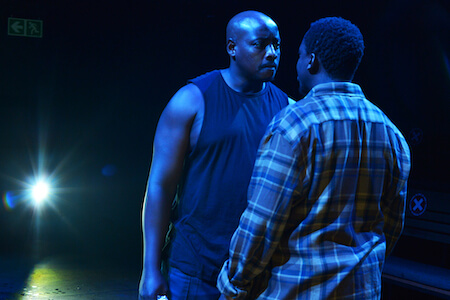 Katlego Chale plays Oshoosi Size, fresh out of jail and dossed down at his brother’s car repair workshop while he finds his feet again. Nhlakanipho Manqele plays his bother Ogun, a hulk of a man whose tough exterior covers a caring heart. Ogun is anxious to keep Oshoosi out of jail again now that he’s back under his care, but gets the balance wrong and his reminders become constricting. “I have got enough memories without you putting in another load every five minutes,” Osooshi complains.

The third character is Elegba, a cell-mate who offered Oshoosi protection – at a price - from other threats that were rife inside their jail. Marlo Minnaar plays Elegba perfectly, oozing menace and cold-hearted calculations behind his sly façade of friendship. 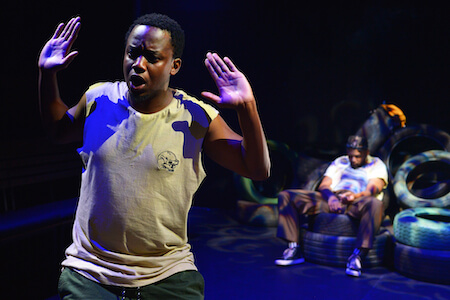 Another appealing aspect of the play is the self-conscious verbalising of stage directions that McCraney has included. So Manqele will make a speech then say: “Ogun, angry, exits the stage.” It’s disconcerting at first, then amusing, and it confirms your own thoughts about their moods and adds a dramatical flourish that reminds you this is a play with a crescendo looming.

The story is a powerful tale of brotherhood, with a steadily crafted background of poverty, ambition and the underlying inequality and precariousness of life as a poor black man in a racist country. The police are a constant presence in their lives, giving the characters chance to sneeringly re-enact their encounters with the law in a world where they are guilty until proven innocent. 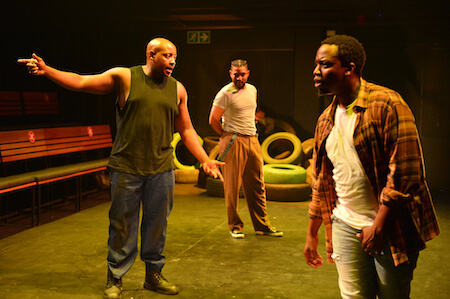 The action is tightly directed by James Ngcobo but he leaves space for thoughtful movement too, with Chale sometimes using dance to express the nightmares and frustrations of Oshoosi. The choreography by Lulu Mlangeni, moody lighting by Simon King and the simple set by Nadya Cohen with just a heap of tyres all enhance the atmosphere by focusing your attention.

There’s a tangible tension on the stage peppered with light moments of humour. First your admiration goes to Manqele as Ogun when he makes a stirring speech of brotherly love. Then you wonder if Chale isn’t the better actor when he moves you with an outburst of frustration and ambition. When Minnaar oozes onto the stage your attention is drawn to him instead, and you realise this is a wonderfully intense triangle of talent.

The Brothers Size runs at the Market Theatre until February 28. Tickets from Webtickets. Photos by Lungelo Mbulwana.