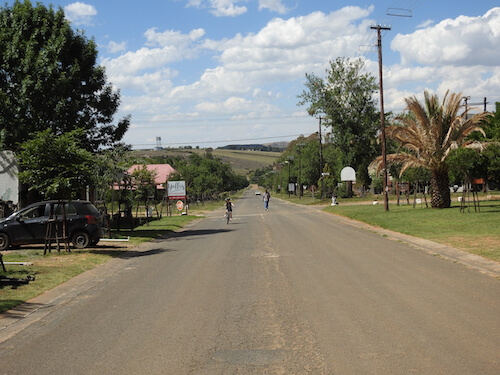 When we arrive at Rosendal, I’m not sure we’ve really arrived anywhere at all.

We’ve pulled up outside a building next to another building, but all around us are empty plots and open spaces. Running off this stretch of pothole-pitted road are wide dirt tracks, bearing names that promise grandeur - Kerk Street, President Steyn and Peacock Street. Scattered along them are a few houses or stores with cute verandas and attractive wrought iron decor. It’s like a chessboard in the final moments, with only a few pieces standing amid the empty squares.

I’d hitched a lift with my friends and their three constantly active boys for a weekend in the rural Free State. The open spaces and lack of crime in this tiny dorpy are perfect, they say, because the kids can disappear on their bikes for hours and the only danger is they’ll return with muddy shoes and bloody knees. 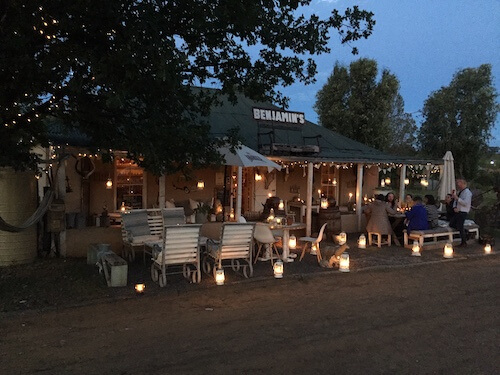 I take a stroll in search of the town centre, and realise there isn’t one. Even the church stands in forlorn isolation, locked and seemingly abandoned. At a crossroads, three dogs are the sole sign of life. I half expect tumbleweed to billow past, followed by the sound of Clint Eastwood cocking his gun. If Rosendal ever tires of being so quiet, it’s the perfect setting for spaghetti westerns.

Our base is the Post Office, a sturdy sandstone building dating from 1919. It was the town’s first public building, and some historical features are still intact, like an underground telecoms bunker that’s now a wine cellar. It’s been beautifully adapted for self-catering accommodation with three en-suite bedrooms, including four beds in the loft, sealed off by a trapdoor. A perfect den for boisterous kids.

Dinner that evening is at Yolla’s, a two minute walk away. We sit outside as the sun descends, drinking boxed wine as the kids eat pizzas. Yolla’s turns out to be like Piccadilly Circus – sit there long enough, and everyone passes through. The locals pull up for a beer, or to collect take-aways and chat with their neighbours. 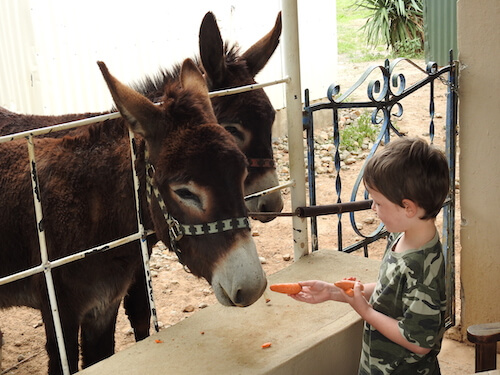 Later we stroll down to a dam, with bats silently flapping above up as dusk folds into dark. Silence is everywhere, and we retire for an early night.

On Saturday mornings Benjamin’s is the place to be, although the owner’s name is Frik de Jager. It’s a gem of a place filled with nick-nacks to admire or buy, a bookshelf of well-read novels, and tables outside where we eat enormous waffles, piled high with apple crumble and toffee sauce. De Jager’s two donkeys look on jealously, knowing we’re only allowed to feed them carrots.

At 9am a craft market swings into action, but only for two hours on the last Saturday of the month, because trade is limited here, unlike the arty metropolis of Clarens down the road. The locals look down on Clarens as too commercialised, and fear Rosendal will follow in its wake as more burned-out Gautengers arrive. It’s already gaining a reputation as a small arts town, and residents are anxious it doesn’t grow to replicate all the things they’re fleeing. 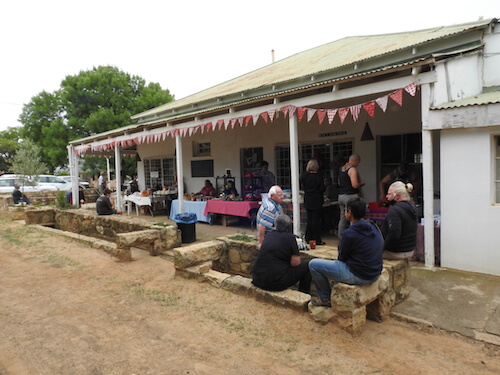 “Clarens is so homogenous – it’s becoming Sandton-on-the-Veld,” says Douglas Mason. He’s the unlikeliest arrival so far, a Canadian journalist for The Economist who’s covered various African war zones. He owns the Post Office and the Old Bank, which he also renovated as accommodation, and plans to open a wine bar. He’s doing it tastefully to retain the history and heritage.

Rosendal is a town that was never finished, he explains. “It was laid out with a grid pattern for a full settlement, but it never took off. So you have this unfinished quality which is part of the charm. By the 1980s it had become a ghost town. When the little Afrikaner school closed in 1982 people started moving away and businesses started to close, and there are a large number of abandoned, dilapidated buildings.”

Today it’s home to diverse groups who all have to get along, he says, like farmers, artists, gays and old school Afrikaners. “There are cliques and rivalries, friends and ex-friends – that’s village life.” 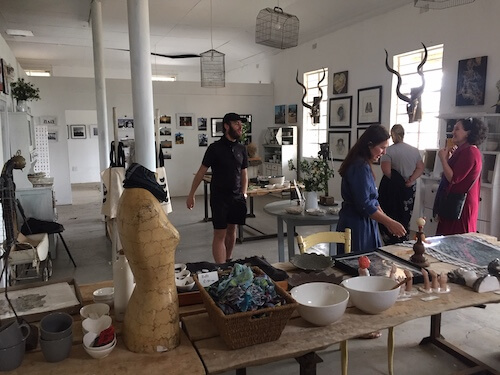 Back at the craft stalls, I’m looking at some handmade face creams when a commanding voice encourages me to ask questions. It’s Gretha Brazelle, an actress who lives in Johannesburg but bought a house here in her first steps towards country living. “It’s divine here,” she announces. “We come and go and there’s a bunch of new people and a gorgeous energy.”

Her change of lifestyle began with a broken arm that curtailed her work. “When you stop, you see a lot of other things and there’s time to alter and not be in the noise. That had a huge impact on my transformation,” she says. The Covid-19 lockdown that closed the theatres was another shove in her new direction of creating natural skincare products.

Over at Rosendal Art Gallery, paintings and sculptures by local artists are on display. It was opened by Lein Smuts, an artist and gallery curator who arrived in February 2020. She previously ran an outlet in Pretoria, but when new landlords hiked the rent she was forced into a rethink. “I did an audit of my life and realised it was a rat-race,” she says. Friends who lived in Rosendal invited her over as a stopgap, and when she realised local artists needed an exhibition space, the idea of a gallery took shape. 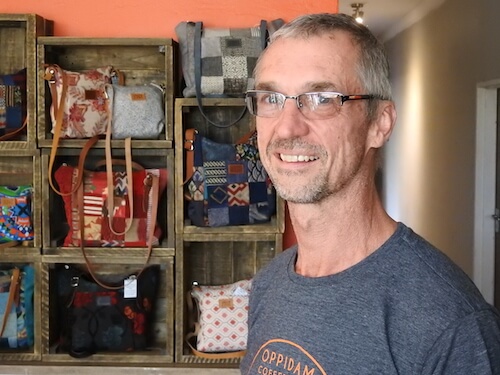 Smuts reckons the often-quoted population figure of 102 is wrong, because she’s only counted 52. But it’s growing. Newcomer Hennie Burger opened the Oppidam Coffee Shop last October after quitting his job with a bank, tired of the corporate nonsense. He seems such a friendly, mild-mannered man that I can’t imagine him yelling at his boss, but he assures me that’s what happened. On the drive home after resigning he rang his partner and said ‘pack your bags, we’re leaving’. They restored one of Rosendal’s lovely old buildings, and Burger now bakes delicious cakes as he tries to find his niche in the community.

Village social life includes a bike club and tennis courts that both welcome visitors. There’s an occasional long table at Benjamin’s too, where everyone eats fine international food while De Jager tells stories of its origin. Candlelight makes the place feel magical as he tells us he learned to cook spanakopita on Lesbos, after a nasty fall when he impaled himself on a spike and stayed for weeks to recuperate. Chicken with olives and couscous came from glorious escapades in northern Spain. I didn’t expect to meet such adventurers in a rural village. 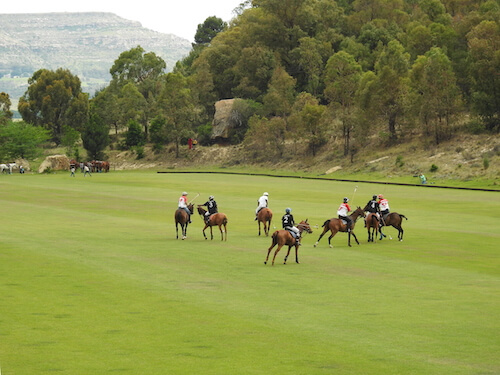 But the weekend’s final encounter was even more unlikely – a polo match in the Witteberg mountains. The Poloafrica Development Trust teaches local kids to ride, along with more practical skills like maths, English, welding, carpentry and beekeeping. “It’s a wonderful safe haven for kids in the holidays and weekends,” says its founder Catherine Cairns.

Visitors are welcome at the tournaments, so we watch the kids compete against Sparta, a professional team that has brought its horses from 100km away to this pristine polo field hidden in the mountains. It’s lovely, sitting in the sun and watching kids and horses frolic.

Since my return, I’ve encountered other weary or bewildered souls who’ve lost their jobs or are unhappy with the rat-race life they used to lead. Covid has rattled their world, and they’re looking at Rosendal as the answer. Those empty plots of land could be filling up quite soon.