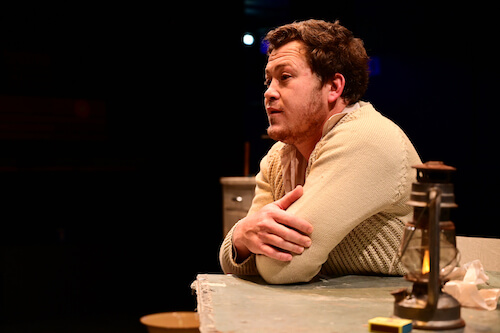 With an endless selection of plays crying out to be staged, it’s interesting that the Market Theatre’s artistic director James Ngcobo has chosen to revive Blood Knot.

It’s billed as part of the theatre’s 45th anniversary celebrations, but honouring history seems less important right now than choosing material that will help to build an audience for the future.

This Athol Fugard play was first performed way back in 1961 when its story spoke directly to the politics of the time. By featuring a black man and his light-skinned brother, the progeny of a black mother and a white father, it allowed Fugard to highlight, muse on and condemn the different standing in society that their skin tone gives them.

Revisiting Blood Knot lets us see how the theatre and society itself have changed, and sadly South African attitudes haven’t changed enough so its broader themes still resonate sixty years after its premier.

The story see Morris (Francois Jacobs) encourage his illiterate brother Zacharia (Mncedisi Shabangu) to embark on a penpal relationship when a lack of carnal pleasures sees Zach grow disruptively restless. Morris writes the letters for him, but the woman they correspond with turns out to be white. Sixty years ago this was a major taboo, and Morris is genuinely fearful of the consequences of defying the race laws. 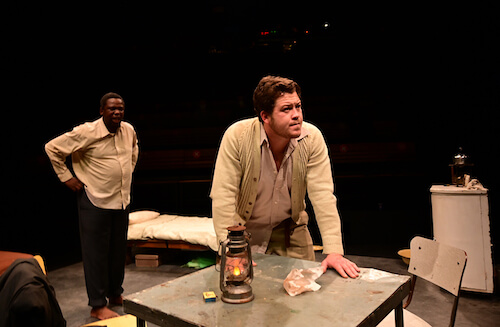 For Zach the sweet, illicit thought of whiteness appeals, and he laughs it off until Morris forces him to see himself for what he is and to recognise the limitations that his colour confines him to. The words sting as Morris calls him a black-born boy playing with white ideas.

As plot lines go it feels pretty thin these days, but it provides the mechanism for the debates on racism that are fleshed out with some memories. A pale skin has allowed Morris to envisage greater things, and he dreams of buying a small farm for the two of them. Zach is more down to earth - or downtrodden - declaring that he’s lived for 10 years without plans and has never needed them. The sum extent of his ambition is a return to the entertaining nights he had with an old friend and the women who came their way. Yet when he talks of a woman who we’d assumed was a reciprocal lover, the brutality of his brief words disturbs the audience.

The play is based in the suburb of Korsten in Port Elizabeth, an area with no prospects and little dignity. There isn’t even the space for a man to breathe, Fugard writes, in this life of poverty and despair.

The stage set by Nadya Cohen captures that well, with two beds, a table and chairs and a few other sticks of furniture. The sound effects and music by Dean Pitman are equally sparse, forcing Shabangu and Jacobs to hold our attention through their words and emotions alone. They succeed for the full 90 minutes, with both men masters of their craft.

At first Morris seems the subservient of the two, looking after the house and preparing meals while Zach is at work. Jacobs gives him a meek thoughtfulness that begins to change as he grows exasperated with his brother’s lack of ambition. Shabangu imbues Zach with an air of resignation then flashes of anger at the inferior role life has dealt him. 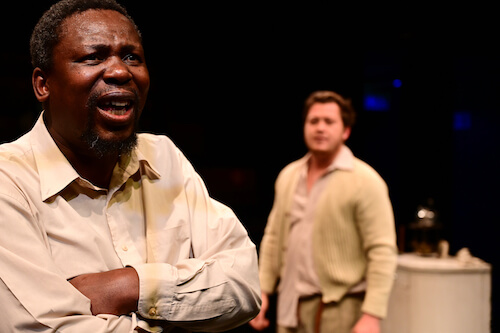 Blood Knot was described by New York’s Signature Theatre as Fugard’s revolutionary breakthrough play, a searing indictment of apartheid and one of his most celebrated works. Other critics found it racist in itself, depicting the black man as thuggish and lacking in ambition while the whiter brother has dreams and intellect. Yet Fugard makes it clear that the differences are caused by how the boys were raised, with Morris getting the better toys, the kinder treatment and the wider opportunities.

When the play first debuted with Fugard himself as Morris and Zakes Mokae as Zach, it was the first time a mixed-race cast had appeared on stage. Fugard’s script was initially four hours long, and he later shortened it two and a half hours, removing much of its poetry and its hope.

This version directed by Ngcobo lasts a more comfortable 90 minutes, but feels truncated and lacks some of the power, especially in its final moments, that previous productions were praised for.

Blood Knot runs at the Market Theatre until November 14. Tickets from R90 at the box office, from 083-246-4950, or email anthonye@markettheatre.co.za.