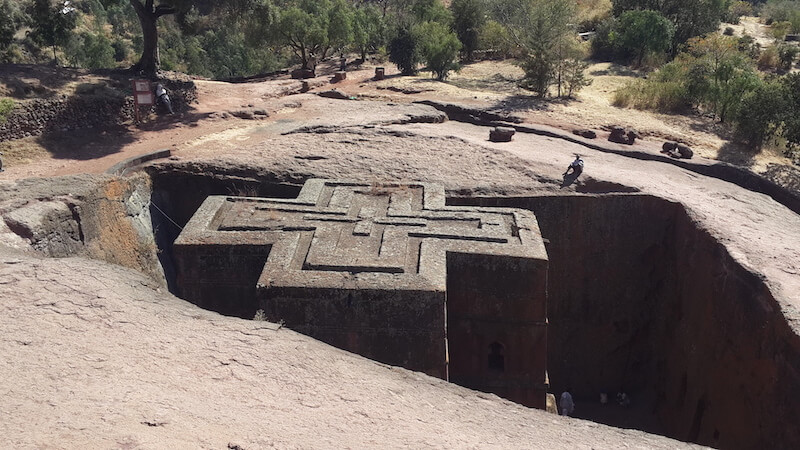 The old man’s face was quite remarkable.

Beautiful, in a way, although it seemed etched with deep furrows from droughts and famines, and the pain of surviving through 17 years when half a million of his countrymen were murdered by the brutal and paranoid communist government.

He was begging at the windows of my minibus in Ethiopia, and I showed him my camera and handed over some money for permission to take his photos. This is a country full of faces that tell amazing stories. 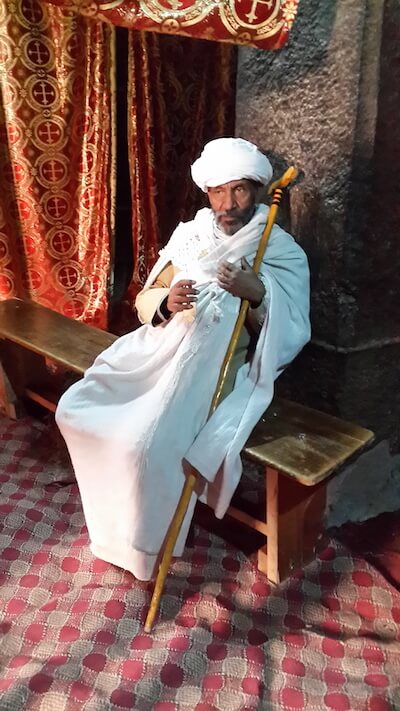 For many visitors, Ethiopia’s highlights are the 11 ancient rock churches of Lalibela, hewn out of solid stone. But for me it’s my encounters with the living that linger. Like young Ebabi Getnet, who walked with me through Lalibela’s dusty, unpaved roads. He told me he’d been training as an engineer until his sister died in childbirth. When a neighbour and then another neighbour also died in pregnancy, he trained as a midwife instead. I asked if women would accept a male midwife, and his answer was simple. “They will accept me because I’m good,” he said.

Ebabi was leading a team of volunteers feeding and washing the feet of pilgrims arriving for the Orthodox Christian Christmas on January 7. Thousands of people dressed in flowing robes and headscarves were descending on the town, often walking barefoot for a month and covering hundreds of kilometres to pray in each church and kiss their stones.

The churches are amazing, with the most famous, Bet Giyorgis, being smaller but taller than I expected, carved into the solid plateau of rock we’re standing on. Some of the churches are linked by tunnels, and our guide Paulos Kumsa of Green Land Tours asked us to place a hand on the shoulder of the person in front, double over because the tunnel is low, and walk in dark silence to experience the mysticism.

It’s a relief to emerge briefly into bright sunlight before stepping into another dark, carpeted church again hewn out of solid rock. While we’re admiring frescoes painted on the walls and ceilings, a priest in elaborate robes emerges from behind a curtain holding an elaborate cross, and poses happily for photographs. When someone moves forward to put money in the donation box the priest subtlety intervenes, and the note disappears inside his robes. Man cannot live by salaries alone, perhaps. 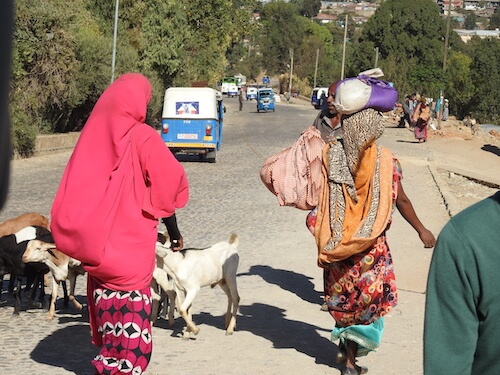 Legends and mythology are as important as hard facts in Ethiopia, and the story goes that these churches were carved in mere days because the angels work at night after tired mortals put down their axes and chisels.

Aksum is another World Heritage Site where a great civilization was trading as early as 400BC. This is where the Queen of Sheba lived in the 10th century BC and the resting place of the Ark of the Covenant, containing the Ten Commandments that God gave to Moses. We can’t see the Ark, because nobody is allowed to enter the small chapel that reputedly houses it - not even the man who devotes his life to guarding it.

Giant obelisks stand on the site of some underground tombs, except for one mighty 33m spire that collapsed as it was erected, crushing a tomb nearby. “You only had one job,” some wit murmurs as we look at the fallen obelisk. It was the largest block of stone that humans have ever tried to erect, bigger even than the obelisks of Egypt. All the tombs that have been found so far have been plundered by grave robbers, but plenty more still lie undiscovered. 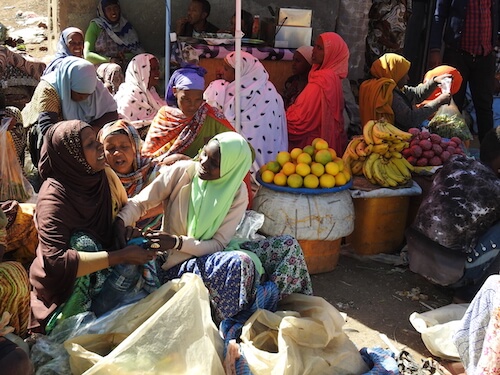 Ethiopia’s constructions today are rarely as impressive or as sturdy as the churches, tombs and obelisks – I blew all the sockets in one hotel bedroom when bare wires on a bedside lamp sparked and ignited.

Still, even the most basic hotels are more lavish than the homes of rural Ethiopians. Driving through mesmerising scenery of dramatic mountains and valleys we pass villages with straw and wooden huts plastered with cow dung and roofed with tin or platted leaves. Litter of plastic bags and bottles lines the roads, and vultures perch on the rubbish dumps. Goats, oxen and impressively horned zebu cattle roam freely, but the crops seem scarce and poor.

One thriving crop is chat, or cat, a leaf chewed for its stimulating properties. But it lulls the regular chewers into a stupor, and they loll around listlessly on the pavements, oblivious to the life around them. 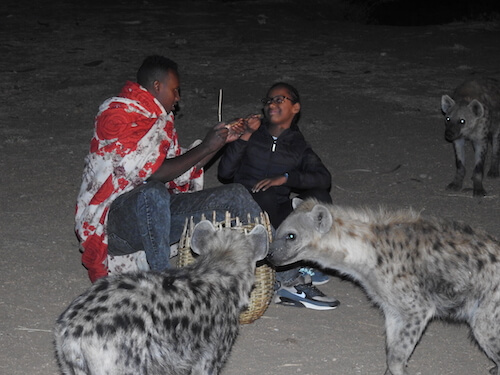 Chat is an important crop around the walled town of Harar, another World Heritage site dating back to perhaps the 7th century. The maze of 368 narrow alleys encircled by thick city walls is delightful to explore, but again it’s the encounters with the living that I’ll remember most. Hyenas, this time, which live wild outside the city but sometimes lope through the ancient stone gates to scavenge for food at night.

A local man has made it his job to feed them, and we join him one evening. He sits in the dust with a basket of meat, and two, then three, large and healthy-looking hyenas slink out of the shadows. Soon there are six or seven, and he calls me forward to join him. I sit at his side as he puts a piece of meat on a stick and holds it up between our heads. A hyena behind me rests its paws on my shoulders and I see its sharp teeth grab the meat from beside my ear. It feels surreal, and I can’t help grinning with the thrill of being so close to such powerful bone-crushing creatures. 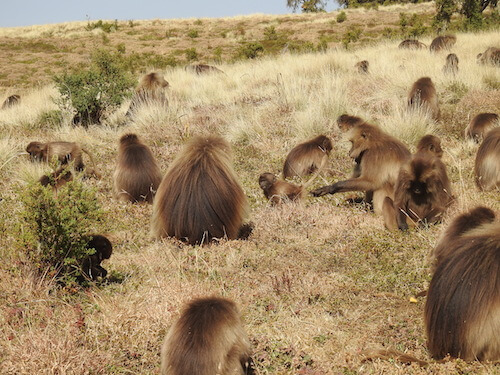 My final memorable encounter with living, breathing Ethiopians came in the Simien Mountains, yet another Unesco World Heritage Site. The guides call it the Roof of Africa, as a massive plateau tumbles into great folds of undulating mountains pierced by jagged volcanic pinnacles, and stretches way beyond all horizons.

We hike through knee-deep grass until we see a troupe of gelada monkeys sitting on some shorter grass in the distance. They’re endemic to Ethiopia, and these sociable little creatures roam in troops of three or four hundred feeding off the roots of plants. They patiently dig up the grass with their fingers until they unearth some roots, then plant their faces into the soil to rip them out with their teeth.

It's a comical sight, and we humans sit among them meriting only an occasional glance as the adults dig and the youngsters romp around screeching and squawking like excited kids.
It’s incredible. Another natural wonder that ranks alongside the ancient human endeavours that make Ethiopia quite magical. 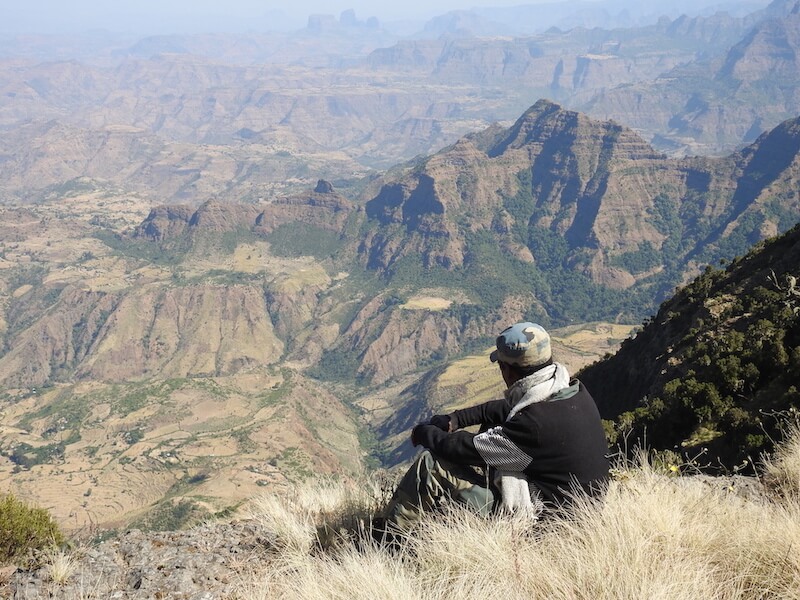