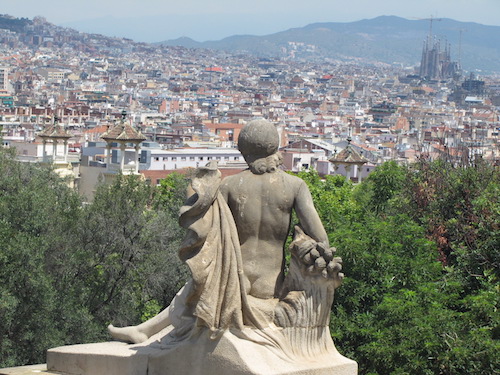 Thirteen minutes. That’s all it took from arriving in Barcelona to encountering one of its greatest claims to fame – the slickest pickpockets in western Europe.

If you’re going to hit, best get hit by a professional, I always say. And they’re at their slickest and quickest on the underground at Barcelona Sants station.

The city treats its notoriety as a pickpocketing playground with a zesty inverted snobbery, much as Jo’burgers think we’re cool for surviving in our own gangsters’ paradise.

But the city is slacking, our tour guide Sybille Spinola cheekily moaned the next day. It’s only second in the global rankings, with Prague taking pole position for pickpocketing. “We’ll beat Prague next year,” she joked, prompting me to instinctively clamp a protective hand over my rear end.

Thankfully our thief had been a decent chap, and the look of horror on my man’s face when he realised his wallet was missing was surpassed by gratitude when he saw the thief had extracted the cash but had the manners to drop the wallet on the train floor with everything else still intact.

It’s a dodgy start to experiencing the city, but after recuperating with some vino and tasty tapas – paid for by credit card - Barcelona began to work its magic.

It’s a city designed for feet, and in the ancient centre that’s the only way to explore the narrow streets peppered with bars, boutiques and severe, thick-stoned churches and palaces.

I’m a huge fan of the free New Europe walking tours, and we met Sybille as she took charge of us in Barri Gotic, the Gothic Quarter where most of the city’s ancient history played out. 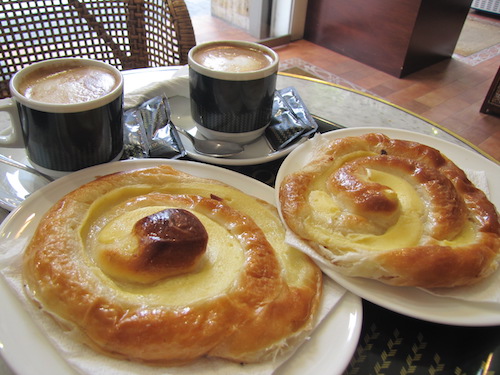 Sybille vivaciously blended history, anecdotes and quips to bring an ancient cast of characters to life, cramming centuries of action into three hours. She told us of Agatha, a young virgin killed by the Spanish Inquisition for defying its warped version of Catholicism. She had her breasts cut off as one of several punishments, and became the patron saint of breadmakers. I remembered her when the large round pastries we ate for lunch came with a definite nipple-shaped nobble in the centre.

We heard of sieges in the city, with the inhabitants sealing themselves off in defiance of the rest of Spain until they could hold out no longer.

The open-topped tour bus is another great way to see the city, with three criss-crossing routes. We spent a day hopping on and off, dipping in quickly and planning where to revisit later. 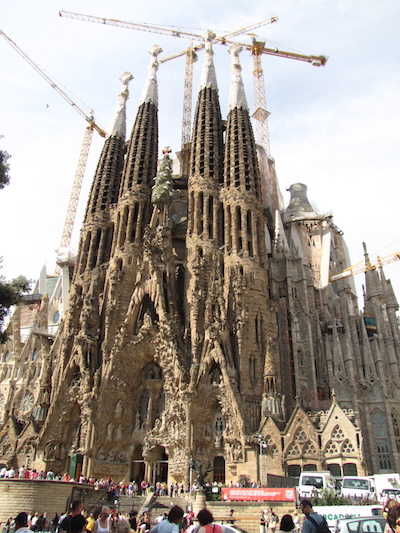 An obvious stop is Sagrada Familia, the famous unfinished church and Antoni Gaudí’s final masterpiece. It looks no nearer to completion than it did when I last saw it four years ago. It will be a shame if they ever lay the last stone really, since it’s more famous for being unfinished than it is for its architecture.

When you look at the bizarre details of birds and trees and Biblical scenes in its facades, all topped by a dripping wax effect, you have to suspect that old Gaudí was fractionally loopy by the time he was wiped out in a careless collision with a tram.

The whole city is rich with Gaudí’s wacky works, like his undulating Pedrera building and a giant mosaic chameleon up at Park Güell.

We broke our sightseeing for a sunny lunch on the beach by the Olympic Village, created for the 1992 Olympics. The menus remember us that the proportion of money to food and drink is always unbalanced on a beach front, so we ate frugally then strolled around the headland in search of ice cream. Instead we found the nudist beach, pointed out to us clearly and wordlessly by a guy striding confidently across the sand.

Exhibitionists of a different kind hang out in in Las Ramblas, the central street that runs from the harbour to the hub of Plaza Catalunya. One night, four street gymnasts good enough for Cirque du Soleil were performing, and four women from the audience were lined up for a grand finale. 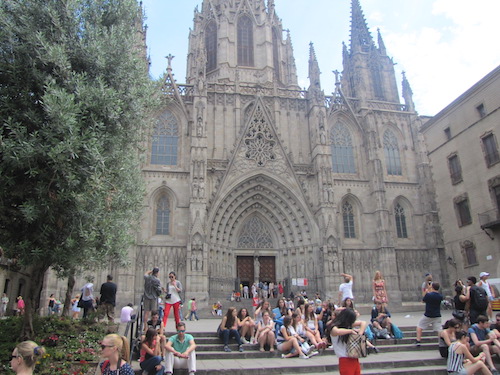 First the acrobats held their hats out for money, saying they wouldn’t complete their act unless we tipped them, rather than applaud then dash away without leaving a cent. It was a fair point, and once the hats were jingling one of the crew performed something like a double twist, treble somersault right over the women. From a standing start. Astonishing.

Las Ramblas is another popular spot for pickpockets, but you get equally fleeced by the overpriced restaurants. It’s far better to explore the side street where the prices and service are both more welcoming. We found a skinny but capacious restaurant where a delicious paella for two was served in a large pan in an old room lined with dark wood and draped with sailing paraphernalia. 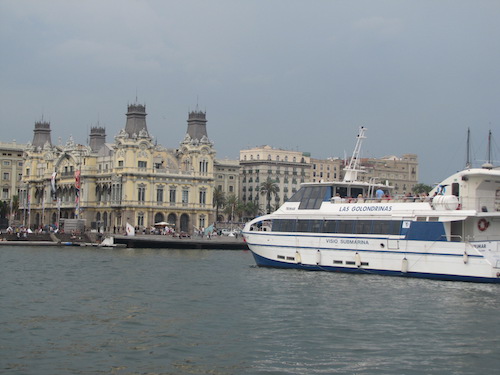 Another afternoon we strolled to the harbour and bought tickets for the 5pm jazz cruise. It’s actually one man with a saxophone, and since he doubles as the barman the music is sporadic. But bobbing around on a boat in the sun, looking back at the gorgeous city with occasional blasts of music was a magical way to spend a couple of hours.

You don’t need wine to be intoxicated by Barcelona. Each night as we strolled back to the apartment we were renting, the vibrant buzz of people having fun in the warm, muggy air was enchanting.

Some evenings we strolled to the Born district where many of the locals live. One tapas bar enticed me in by looking suitably scruffy and offering unpretentious food, It was a great chance to practice my Spanish. Barcelonans speak Catalan rather than Spanish, but generally understand them both. Yet when I asked for a glass of wine, the waiter poured some into a shallow porcelain bowl and left the entire bottle. Had he misunderstood me?

No, he explained, but drinking from a bowl rather than a glass is traditional, and he’d left the whole bottle so I could drink what I like and be charged accordingly. Then instead of having to serve me each time I need a top-up, he could sit back and relax, in true Catalonian style.