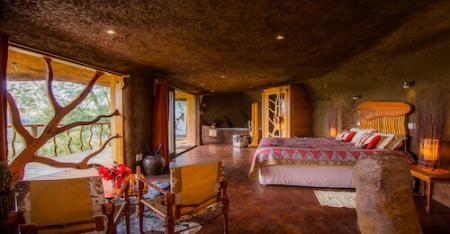 In an earlier life, I’d have dismissed the idea of sleeping in a cave, up a mountain, during the coldest winter imaginable with a snort of derision.

But as a travel addict deprived of thrills by the enforced abstinence of lockdown I’m clutching at excitement wherever I can find it. So driving for five hours to stay in a cave in the Drakensberg suddenly sounded like a huge adventure.

I did have the sense to check that it involved some luxury first, not just bat pooh and draughty tunnels, and the photos of a luxurious bed, a jacuzzi bath, and armchairs by the fireplace were enchanting.

The cave is at Antbear Lodge, an eco-friendly retreat reached via a rough road after Estcourt that I wouldn’t like to tackle in a sedan car. The twisty track crosses an old metal bridge with occasional stops to let herds of goats or cows disperse, before you pull up outside a rather grand-looking double-storey lodge. 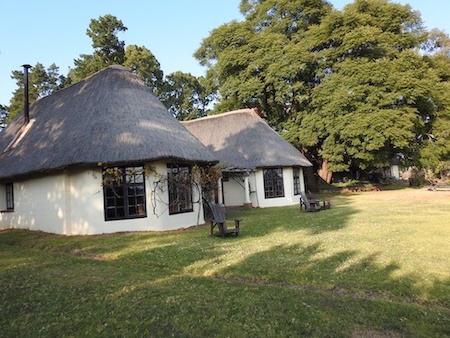 Antbear is a 20-year work in progress by its owners, Andrew and Conny Attwood. They met when Attwood was working in Germany as a software engineer, and moved to the Drakensberg to escape the rat race. There was nothing here but tangles of blackjacks, a crumbling farmhouse and endless views when they first arrived. “We didn’t come to do hospitality, we came to build an alternative lifestyle,” Attwood says.

They bought chickens and cows and planted organic vegetable gardens to be as self-sufficient as possible, and produce their own bread, butter and cheese. Then they started experimenting with alternative materials and learned to build cottages out of straw bales. Their ideas and their skills kept growing, and now the main lodge has a large lounge upstairs, with a library area, lounge bar, dining room and a patio downstairs. The accommodation has expanded into 14 cottages and a small conference centre, all filled with quirky wooden furniture made in the workshop. Some of the doors have elaborate wheels to turn the latches, while the wardrobes and cupboards have complex carved hinges. The lampstands are either simple creations of three wonkily-shaped sticks or intricate carvings, depending on the mood and skill of the craftsmen. 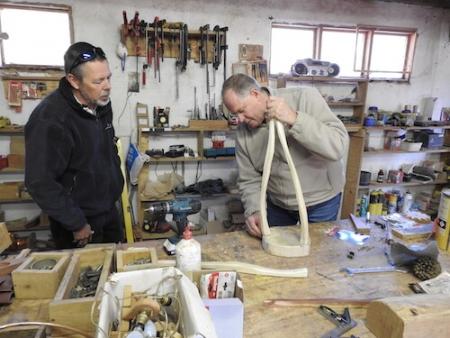 For several years Antbear has run a volunteer scheme where guests can come and learn carpentry and building. Unlike many systems where volunteers pay for the privilege of working, visitors here don’t have to pay and receive free meals and accommodation. Often they’ve been young Europeans going through a crisis of one kind of another, Attwood says, and seeking a retreat that gives them time and space to figure out their next move in life.

Many of us seem to be going through a crisis right now with Covid turning our worlds upside down, so escaping to the mountains was a perfect break. There was time to tramp through the fields down to the dams, or just sit on the deck watching the birds – fat red chats and argumentative black and white things – squabbling outside my cave. 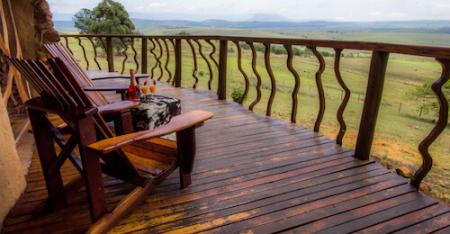 I was a little disappointed that the cave is a manmade creation, rather than carved out by eons of erosion. But it’s probably more comfortable for it. It all began when Attwood laid a concrete base on the edge of a small cliff to support a reed bed water filter. This water purification system stank like a drain, and had to be moved further from the property. That left an unsightly concrete slab, and after various attempts to turn it into something useful, he hit on the idea of putting a roof on it, building a wooden deck, and kitting it out as a luxury cave. It’s now the most popular room, with glass doors opening onto the deck for a spectacular view of the mountains. If you want to stay in splendid isolation you can dine at the cave too, with the staff setting up a table for dinner by candlelight. 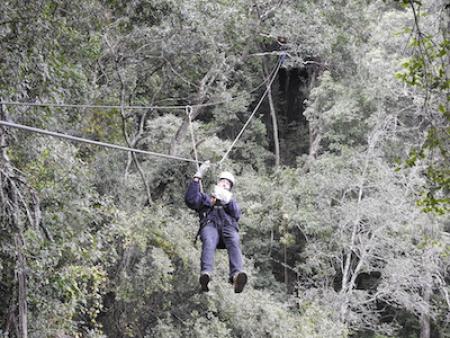 Since there’s plenty to do in the Drakensberg, one morning we zig-zagged back down the mountain to go ziplining. Antbear is an hour and 10 minutes from Drakensberg Canopy Tours, where 12 ziplines stretch across the forest and gorges around Cathkin Peak. The engineering is remarkable, with platforms and walkways bolted onto sheer rock faces and slides that have you whizzing at up to 60kmph. It’s great fun to watch the guides loving their job – swinging upside down and cavorting around before making sure that their guests are all safe and secure. It costs R595 per person and ends with a fairly steep climb out of the gorge for 20 minutes, so it’s a good workout as well as an adrenaline thrill.

Next stop was The Valley Bakery in Champagne Valley for a late lunch of quiche and chips. It was good to find somewhere open, because the journey down from Joburg had emphasised the devastation caused by Covid on the hospitality trade, with two once-popular spots where we tried to find refreshments no longer operating. 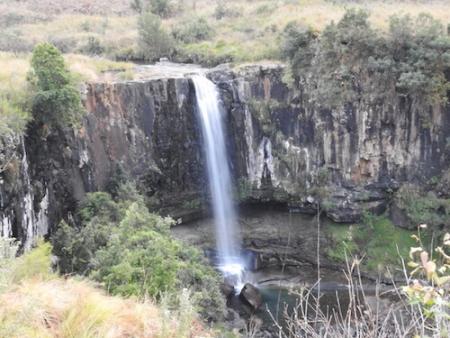 It was late afternoon by now, and my suggestion of heading back to the lodge for wine and restful views was overruled by my hiking-mad companion hankering to see Sterkspruit Waterfall. That’s reached from Monks Cowl Campsite, where we paid R45 to enter the park, and set off at a cracking pace for an hour-long round trip. We had the place to ourselves, except for a squadron of ibis nesting on the rocks around the falls. It’s weird not to see another person, but even the usually popular Drakensberg seem more deserted than ever these days.

We finally bounced back to the lodge at 7pm, where dinner is a set menu that offers some wiggle room if you don’t like what’s on offer. Afterwards we were keen to try Antbear’s option of stargazing with a twist. One of the staff, Mlindeni Sitole, leads you by torchlight through the intense darkness into a field where he’s set up hammocks and hot water bottles. The stars here can be incredible, and as you settle down to admire the Milky Way, Sitole tells you Zulu folklore stories about the skies. He’s a little rusty with too few guests to entertain right now, but his soothing voice soon had my brain wandering off in quiet contemplation, snug beneath the stars.