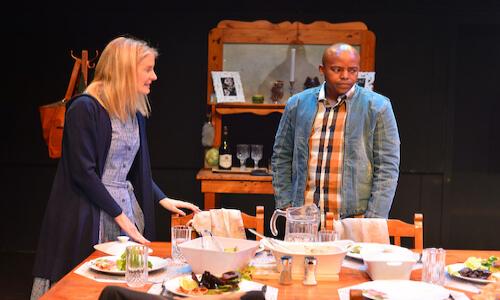 In a world already full of random acts of pain, why do we hurt those we love the most?

Not always with outright brutality, but through the deliberate lies or cruel words that too often characterise family life.

Dusk is a new one-act drama by Mark Scheepers that has finally debuted at Johannesburg’s Market Theatre after delays caused by the Covid lockdowns. It’s a fitting moment to arrive, bringing its own story of death, sorrow and mental illness into a world freshly soaked with that toxic trio.

Dusk is set on a rural farm but its themes of emotional breakdown, deceit, betrayal and a touch of racism are relevant everywhere. Its questioning of whether God exists, or whether we even want him to, also feel particularly apt right now.

The action directed by Palesa Mazamisa takes place in a practical but cosy farmhouse kitchen designed by Karabo Legoabe–Mtshali. It begins with Tessa (Michelle Douglas) preparing lunch for her family. Although the play is in English she initially speaks Afrikaans as she roves around with jittery, nervous movements, calling out to her husband Hannes and setting the table for their sons Rudy and Jantie. None of them are coming, we know that from the start, but we’re not sure why. 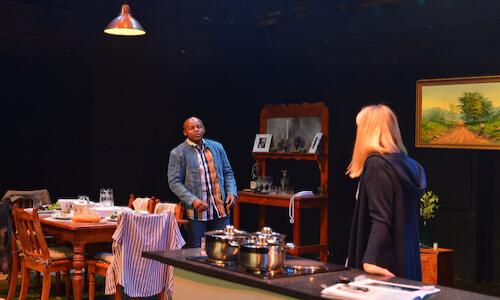 Tessa recreates the motions of that last encounter, talking to her absent family with the intensity of a woman driven mad by memories. She’s distracted and jittery, but never pushes the drama into melodrama as she reaches for her tablets or twists a scarf in a menacing fashion before casually throwing it over her shoulders.

Into the scene walks KG (Loyiso McDonald) who grew up on the farm and was Jantie’s friend. He’s now a doctor coming back to work in the district, but his chief concern is finding out what happened to Jantie on his ill-fated final visit.

McDonald manages to portray a man who’s less confident than he’d like to appear, faced with the tricky task of encouraging a mad woman to confront her memories. Douglas and McDonald play their parts brilliantly and the tension crackles between them. The music underscores this well, as the inobtrusive aural undercurrent heightens the unease.

Twisted comments are threaded through the script and include Tessa urging KG to stay a little longer because a few more minutes won’t kill him. But the audience anxiously fears they might. 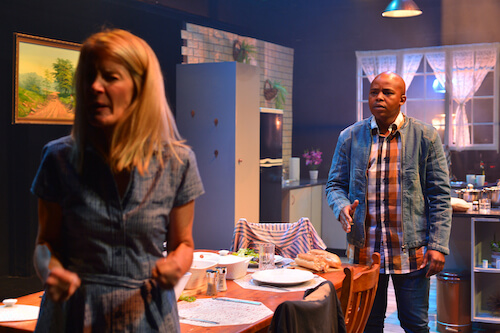 Their conversation interrogates our reactions to grief, with Tessa railing at the bland-but-barbed sympathies thrown out to the grieving. Your family is ripped away from you and all people can say is ‘it’s God’s plan.’ “I’d rather people just said nothing,” Tessa says. “They want me to pack away my pain because they want to get away from the absolute horror that life is.” Mankind is appalling, KG adds later, questioning just who or what God must be if he created barbaric humans in his image.

Another pertinent point is the lot of women, with Tessa telling KG she was once a successful actress with a glittering future, but gave it all up to marry Hannes and have kids. Women who surrender themselves like that sort of fade away, she muses, since wives and mothers aren’t seen as people who might have hopes and dreams of their own. That’s a theme that women can ponder over long after the tale concludes.

Dusk only lasts for an hour, but it’s wonderful to be back into the theatre and transported to a different time and place. Even if you’re happy to escape from this tragic kitchen once the lights go up.